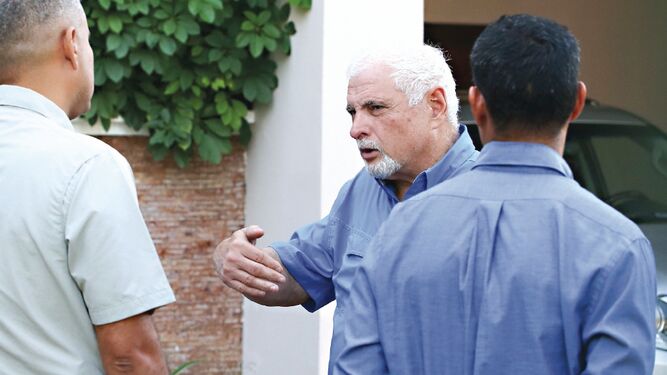 The defense o Panama ex-president Ricardo Martinelli has not been able to weaken the testimony of the protected witness said the prosecution team at the close of Thursday’s hearing into illegal interception of communications.

The protected witness said yesterday that, although he does not know that  the former President Ricardo Martinelli  personally gave the orders for political espionage, his immediate boss in the  National Security Council (CSN), Ronny Rodríguez, told him repeatedly that the ex-ruler  (referred to as Number 1)was the one who ordered the follow-ups and listened to political targets.

The statements  came during cross-examination of the witness by defense lawyer   Alfredo Vallarino,

Vallarino asked the witness directly if he had seen Martinelli order the eavesdropping, and he answered no, although he said that several times Rodriguez told him and his companion, William Pitti, that the ex-ruler l asked him to intervene certain telephone numbers.

Vallarino also questioned the witness in connection with the intervention made to computers located in the National Assembly, belonging to the Panameñista Party, to which he also replied that he was not aware that Martinelli had ordered it, but indicated that Rodríguez ordered him to take the material obtained in that operation to the Presidency of the Republic and deliver it to Martinelli himself.

The lawyer also asked the witness why in 2014 he testified about the alleged relationship of Martinelli with the eavesdropping under anonymity, and the witness explained that  it was out of fear.

Ricaurte González -of the prosecutors' team said that, after the cross-examination, Martinelli's defense has not been able to weaken the testimony of the protected witness, who has maintained his statements.

González stressed that the defense has tried to sell the idea that the witness has entered into great contradictions, but in fact, this has ratified dates, places, and events in which he participated with his colleagues from the National Security Council Ronny Rodríguez and William Pitti

On the other hand, during the hearing yesterday, the protected witness acknowledged that in mid-March he met with prosecutors Ricaurte González and Aurelio Vásquez at the Washington hotel in Colón, and at that meeting they asked him to appear as a witness.

Meanwhile, the president of the trial court, Judge Roberto Tejeira, ordered a that  Balbina Herrera,  of the Democratic Revolutionary Party (PRD) and victim of the interceptions, to leave the room.

The judge argued that Herrera was requested as a witness by the prosecutor's office and that she could be required again in the trial, which could contaminate the process if she heard the testimony of other witnesses and the allegations of the complaint and the defense.

In response, Herrera said that as a victim he had the right to be in the trial. She urged other victims to appear at the hearing and to make clear their need for justice and to prevent this crime from going unpunished.

Judge Tejeira also reported that the court must answer part of a lawsuit filed by Martinelli's lawyers before international courts.