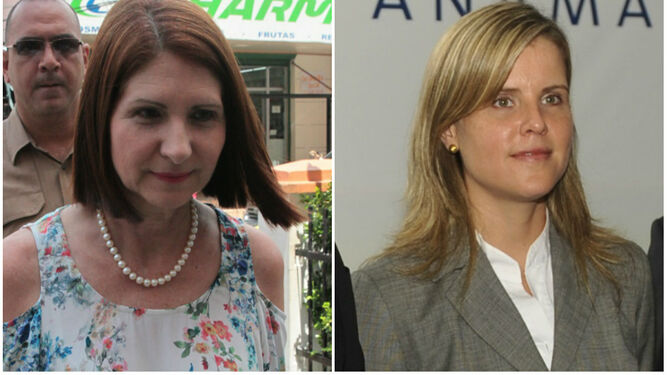 The Sixth Anti-Corruption Prosecutor  has  called on  Panama’s  Electoral Tribunal (TE) to lift the  immunity  from prosecution of the former first lady and candidate for deputy, Marta Linares de Martinelli, and Kristelle Getzler, wife of former Minister of Finance  Frank de Lima,

Both women are running for election to the Central American Parliament (Parlacen) and are under investigation for the alleged payment of bribes by government contractors to past government officials, better known as the Blue Apple case.

According to the Prosecutor's Office, the request -presented on April 16- is for the alleged commission "of the crime against public administration, against the economic order and against collective security."

The General Secretariat of the TE received the request and the file was distributed: The speaker will be  Heriberto Araúz who was the dissenting judge when the TE ruled that Ricardo Martinelli was not able to run for political office in the upcoming elections.

The Public Ministry reported earlier this year that the investigation into the Blue Apple case was concluded. This process was opened in September 2017 when a "basket" society was detected, presumably created in order to receive bribes paid by State contractors in exchange for the streamlining of payments for projects assigned between 2009 and 2014.

Marta  Linares de Martinelli, wife of the former president. has accepted Article 25 of the Constitution to not declare when the prosecutor's office summoned her to answer for the Lemar foundation, which allegedly received unjustified payments from state contractors. Marta Linares is the legal representative of the foundation since 2016.

Linares de Martinelli explained,  that she is the legal representative of the foundation since 2016 and that the facts investigated date from 2012. However, at that time she was listed as treasurer of the foundation.

Getzler, who was secretary of Economic Affairs in the government of Ricardo Martinelli. Her connection with the case arose after the alleged purchase of a BMW  at Bavarian Motors, with money allegedly stemming from the corruption judicial sources told La Prensa.
blue-apple marta-martinelli
Share
Previous Post
Massacre suspect fears for his life
Next Post
COVID-19  cases  pass 70,000 mark with 1,553 deaths