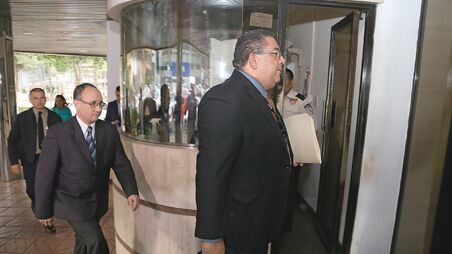 Panama’s The  Public Prosecutor's Office (MP) has filed an appeal for constitutional guarantees against the president of the court trying former President Ricardo Martinelli for alleged embezzlement and illegal wiretapping.

There were earlier concerns about the appointment of Judge Roberto Tejeira to the court because of his previous close ties to the Martinelli administration.

Prosecutor Aurelio Vásquez, who represents the MP in the trial, said that the safeguard of guarantees attacks the decision of TejeiraJ - to prevent the opening and comparison of the content of the compact disc that has the information of the email  radpty507@gmail.com, reports La Prensa.

This email contains the confidential material intercepted to the victims by the National Security Council (CSN), during the last two years of the Martinelli government.

The compact disc was found in the diligence carried out by the prosecutor's office in September 2014 in the 150th building of Quarry Heights, headquarters of the CSN.

The report of that diligence was signed by Luis Enrique Rivera Calle, head of Computing at the Institute of Legal Medicine and Forensic Sciences, who is currently testifying at the trial.

Vásquez explained that this material had already been admitted as evidence by Judge Jerónimo Mejía, acting as judge of guarantees, during the intermediate phase of the process, when it was under the jurisdiction of the Supreme Court of Justice.

Prosecutors at the Public Prosecutor's Office warned that Judge Roberto Tejeira is unaware of a test that has already been admitted by the judge of guarantees.

The prosecutor indicated that now the trial court has decided not to authorize the opening of the compact disc, which violates a decision of the Court.

"There is no sense in admitting material evidence without being able to open it and, based on this situation, and since the prosecution requested reconsideration what is possible is an Amparo of constitutional guarantees,"  stressed. Vásquez.

In the opinion of the prosecutor, the measure taken by the trial court "violates" the due process.

In the protection of guarantees, the MP also requests that the oral trial that follows Martinelli be suspended until the Supreme Court of Justice resolves the merits of the appeal.

Carlos Carrillo, of Martinelli's legal team, said they share the court's decision, so the test should be excluded.

Tejeiea and Caballero held posts in the Martinelli administration.

The three judges in February denied challenges filed against them for alleged links with the defendant and for rulings that had been issued against some of the victims.

Judicial sources informed that the appeal will be distributed on Wednesday, April 17 at 3:00 p.m.

On April 11, Judge Tejeira decreed a recess until April 15 today, so that the prosecutor's office could take copies of the seven booklets containing the confidential material intercepted to the victims and deliver them to Martinelli's defense. The seven booklets total of 3,245 pages.