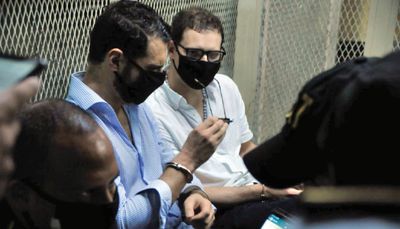 The Panama government of Laurentino Cortizo, through its consulate in Miami, issued passports to the fugitive sons of former president Ricardo Martinelli  while warrants for their arrest to face trial in the Odebrecht and Blue Apple cases were still in force.

The Panama Passport Authority (APAP), issued the passports in January and February t to Ricardo Alberto and Luis Enrique Martinelli Linares respectively, despite the fact that At that time, an Interpol  Red Alert for their arrest was in place.

It was not until March that the Second Court of Justice granted bail of $2 million each for the Odebrecht case.

Luis Enrique Martinelli posted the bond on June 22, and a day later the Third Court of Criminal Cases, requested the Directorate of Judicial Investigation to rescind the arrest warrant for hia arrest ., Ricardo Alberto posted his bond on July 7 the day of his arrest in Guatemala.

La Prensa reports that it consulted Ricardo Gaitán , consul in Miami, on the subject. and the office responded that as a consulate, they receive "all Panamanians" who request any documentation or service.

The brothers are currently behinf bars in a Guatemala  prison awaiting extradition hearings.

Panama | Martinelli Brothers Fugitives and the Red Alert. Red alert on the Martinelli brother fugitives was never ever published in the news media! Red alert certainly would have gotten global attention for...Martinelli fugitives! This means... Panama's news media publication of red alert for the fugitives was suppressed by the state! Red alert are factual truths when looking for these fugitives and many more and yet... very little to non existent publications. Red alert means dangerous criminals on the loose and yet...the public does not read about it??? Panama reputation? What reputation...reputation is corruption at all levels of Panama's government. So, Why suppress the...red alert publication? These are high profile, elite, underground operators for their father's political dictatorship motivations! In addition...free passports issued because...ALL PANAMANIANS receive it? So, ALL PANAMANIANS ARE CLASSIFIED AS EQUALS IN A LOVELY DEMOCRACY! (try again). Suppression...suppression...corruption...corruption...Martinelli's and free passport and suppressed publication of [RED ALERT]...JUST FREE PASSPORTS FOR EVERYTHING UNDERGROUND! United States and Guatemala task force operation is now in the process of extradition and NO... FREE PASSPORT and you know what? These Martinelli fugitives passports in the U.S. expired? Passports... I guess they got...LAZY! These Martinelli fugives did not get sworn in to the Guatemala's Parlacen as deputies. I guess they got...LAZY! Panama had ample opportunities to mete out justice on the Martinelli fugitives. I guess Panama just got...LAZY!!! PANAMA IS CORRUPT...CORRUPT...CORRUPT!