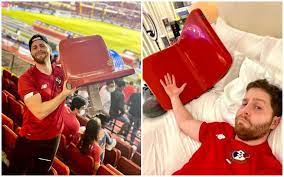 A criminal complaint will be filed, against Mayer Mizrachi By attorney Mike Vanegas representing Pandeportes after Mizrachit ook a chair from Rommel Fernández stadium.

According to Vanegas, the complaint will be presented to the Attorney General of the Nation.

Mizrachi posted a video on his social networks where he is shown with the stadium chair at the end of the meeting between the teams of Panama and El Salvador on November 16.

"The Panamanian Sports Institute (Pandeportes) cannot stop acting and therefore will file a criminal complaint against the criminal act committed by the citizen Mayer Mizrachi (...) It is a duty and a responsibility to act diligently and we will do so. "Vanegas said in a video posted on social media.

" The action of Pandeportes is correct. As much as I have taken a chair to repair it, it is a crime and I pay attention to the consequences. The message was transmitted to me, although it will not have any effect, " said Mayer Mizrachi.