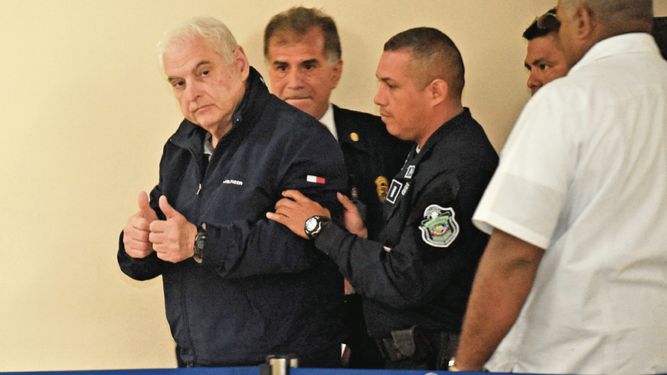 The defense of ex-president Ricardo Martinelli got another setback on Thursday, August 16, when the plenary of Panama's Supreme Court decided not to accept the protection of constitutional guarantees in the process against him for the alleged interceptions of communications during his administration.

The magistrates decided to maintain the competence of the wiretapping case in the Supreme Court despite the repeated request of the defense to send them to the ordinary jurisdiction as the former president resigned his seat. in the Central American Parliament, in June.

The Amparo was presented on July 25, 2018, after the judge of guarantees Jerónimo Mejía refused to annul the process due to an alleged violation of the electoral penalty.

The intermediate heating of the process is scheduled for August 23 when the prosecuting magistrate, Harry Diaz returns from vacation.

I took a while to think about this; and for what it's worth, this is my opinion: the General Attorney needs to stay where she is ... for the present. While I think she'd make a fine President of Panama, she would be impotent in that role at the present because branches of the Administration (from the lawmakers to the Judiciary) need to be drained of swamp creatures. The President can be restrained from going too far off course by the populace (through strikes) or by the Civil Society (which seems in Panama to be somewhat an effective body). The Lawmakers (vis a vis President Abrego) seem unable to be controlled or restrained; the Judicial body -- well, we know where that stands pretty well and the only person who may be able to affect change there is Attorney General Ms. Porcell. She represents truth to power and appears to have a clear understanding of right from wrong and the determination. If she were to leave that role ... at this next election ... for a shot at the highest office in the country, the branch of government which deals with prosecution would go on with business as usual ... and that is a disaster for the future of Panama. But your suggestion is an interesting concept; and I think her time will come.

The man thinks he smart but he's just an evil crook that will die in prison and his sons will get fked . All the other corruption cases are still to come .start seizing assets .

Extracting Justice in this case is going to be like pulling hen's teeth but if anyone can keep our judges from swaying to pressure, the lady Prosecutor may need to take them behind the curtain and butt kick the gutless swines. She's our last hope.

PANAMA | THE $14 MILLION PEGASUS: D.C. KNOWS PANAMANIANS Panama privacy laws has been a long contending issue for at least a decade. Panama privacy laws is at risk as long as Pegasus is in the hands of Martinelli. Panama Pegasus gives an unfair advantage to the Democratico Cambio. Panama privacy laws is at risk for future generations of the electoral process. Panama investigation to find Pegasus has turned up empty handed. Panama former president Martinelli has made threats with new revelations. Panama and Pegasus: What you need to know. - Link below https://www.lookout.com/trident-pegasus-enterprise-discovery

I'm beginning to believe the people may just win and the former President will actually see prison. Maybe it's just wishful thinking on my part however.