Martinelli strikes back with sheriff;s raid 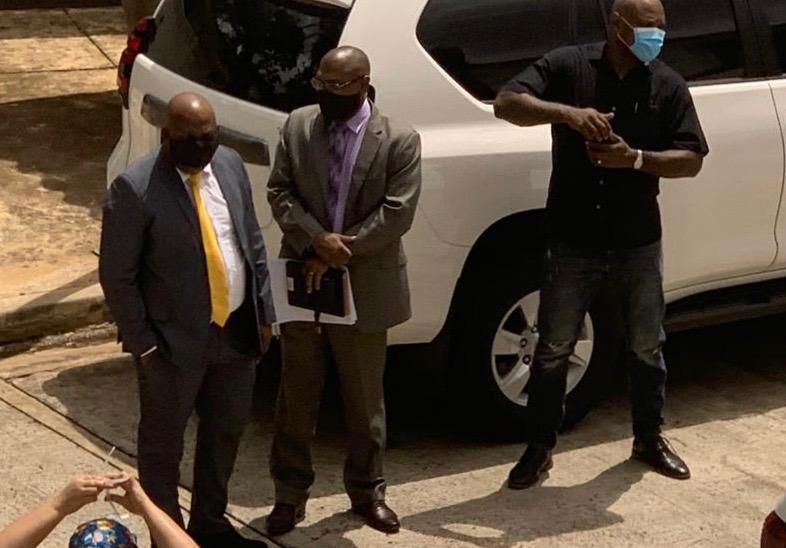 Former president Ricardo Martinelli, facing his own legal challenges has been throwing out multi-million dollar lawsuits like a desperate survivor lobbing grenades from an encircled bunker, with judges, media outlets journalists and lawyers among his preferred targets.

The latest to come into his crosshairs is former Attorney General Kenia Porcell.

On Thursday morning  July 9, Grennal Cruz , a sheriff of the Third Civil Court, accompanied by police officers and Martinelli lawyer Alberto Vallarino arrived at her home in the Mont Blanc sector of Brisas del Golf , to seize her assets They entered the home of the former AG , who was at the scene, with her husband and two children.

“The fact that they have come to my house, within a civil kidnapping, and that they have brought this many police officers and technically invaded my residence ... My son was in his classes. They wanted to go to the iPad where my son was studying. It is an abuse of power, ”said Porcell.

“I understand that there is a civil lawsuit. I do not know the facts, but what is certain is that if something happened while I was a prosecutor, the civil jurisdiction is not competent, "she added.

In  February, Judge Ana Zita Rowe authorized the seizure of property, for up to $120,000, although Porcell told reporters that they wanted to take property valued at about $140,000. The civil lawsuit that supports the seizure  - "whose amount exceeds $1 million," according to the documents - was filed on Wednesday, July 8, at 11:47 am, so the Thursday strike took place less than 24 hours later.

The diligence of  Thursday had the purpose of looking for those movable assets liable to be seized: furniture, ornaments, clothing, paintings ... All valuables could have been taken away.

In the case of the former attorney, most of those assets are pledged. Article 537 of the Judicial Code states: “ Pledged movable property may only be kidnapped or seized by the pledgee creditor.

Many cops
Porcell "is impressed by how the State lent the entire police force to carry out a civil procedure," said lawyer David Díaz , who was deputy secretary-general of the Office of the Attorney General, when Porcell was in command (2015-2019).

“The civil norm gives the possibility that if the person resists, support is requested. But that has

It is not the only action taken by Martinelli against Porcell reports La Prensa.

In  January filed two criminal complaints against her, for the alleged commission of crimes against the public administration and for slander. Porcell, was head of the Public Ministry between 2014 and 2019, led several investigations of alleged corruption during Martinelli's administration.

Lawyer Vallarino, said Porcell has made several statements violating his client's presumption of innocence and nnounced that his client will file more criminal lawsuits against her.

Porcell resigned last December, after learning that the content of his private communications with former President Juan Carlos Varela , through the Varelaleaks . She was replaced by  Eduardo Ulloa in January.

Martinellihas threatened to seize the asets of La Prensa, while he is facing trial in the New Business case for allegedly using state funds to purchase the Epasa group, publishers of  Panama America.