Martinelli sons seized in Guatemala in US money laundering probe 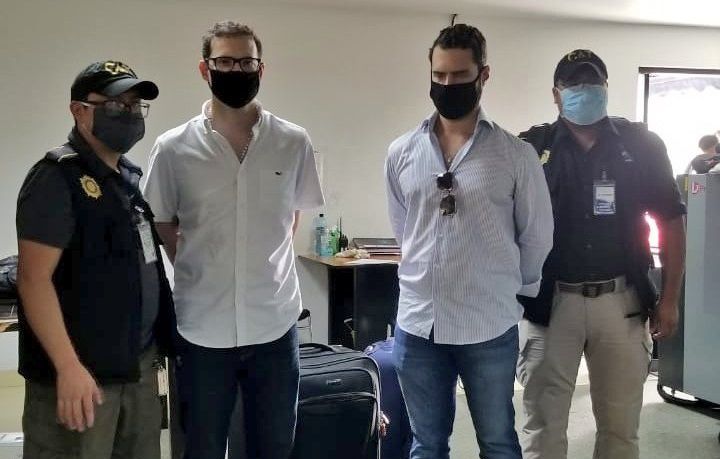 The two sons of former Panama president Ricardo Martinelli were arrested in  Guatemala on  Monday, July 6   were detained in Guatemala on Monday, July 6  following a request for extradition to the United States, where they are required in a case of an alleged conspiracy to commit money laundering.

The Guatemalan National Civil Police reported that thr  Brothers Ricardo Alberto and Luis Enrique Martinelli Linares were captured shortly before noon at the La Aurora airport, as they were preparing to board a private humanitarian flight.

Both were under  "surveillance and monitoring since June 30 of this year, after  having classified information that today [Monday] they would be leaving the country."

“These persons, when identified, are notified of a provisional arrest warrant for extradition purposes dated July 3 of this year, for conspiracy to commit money laundering involving a specific activity according to the United States code, according to the order of the Multi-person Criminal First Instance Court for Narco Activity and Crimes Against the Environment in Guatemala, ”the Police reported in a note shared by his spokesman Edwin Monroy.

Ricardo Alberto, 40, and Luis Enrique, 38, carried passports that accredited them as members of the Central American Parliament ( Parlacen ), whose headquarters are in Guatemala, and said they had Italian-Panamanian nationality. They also had four cell phones and cash reports La Prensa.

The two said that they were alternate deputies of Parlacen and showed the diplomatic cards dated July 25, 2019.

They were immediately handcuffed and taken to court, "so they can figure out their situation."

Jorge Aguilar Chinchilla, another spokesman for the Guatemalan police, addressed the issue on Radio Panama.

“Right now, two people are being brought to court. They are Luis Enrique Martinelli Linares and Ricardo Alberto Martinelli Linares. They were made available to the Court here in Guatemala, since there is an arrest warrant for extradition purposes, as stated in the order for conspiracy to commit money laundering, ”said Aguilar Chinchilla, who indicated that the brothers allegedly said they were going to El Salvador.

Ricardo Alberto and Luis Enrique have resided in the  US for the last 5 years. On November 20, 2018, they were detained in Coral Gables, Miami, by immigration agents, who then reported that the brothers - although they had legally entered the country - no longer had a valid visa. They were detained for 15 days in a migratory shelter in the Everglades, which they left after getting bail for  $1 million each.

“It is when these people are identified in the area, to determine if there is any type of disposition; it was possible to determine that they have an arrest warrant in force. ” "There was information that they would be leaving the country today and the arrest warrant is dated July 3 and today it has been made effective," said Aguilar Chinchilla.

He reiterated that the request was made by the United States and that the work was for intelligence and investigation.

In Guatemala, the N799RM plane, owned by the former president, had landed at 1:12 pm on Monday.

In Panama, Ricardo Alberto and Luis Enrique are required as defendants in the Odebrecht and New Business cases, both investigations related to the payment of bribes by state contractors, during their father's term.

The former president is also being investigated for Odebrecht's bribes, but he has not been investigated because he presented an incapacity certificate and a challenge against the prosecutors who are handling the case.

The Second Superior Court of Justice granted bonds to avoid the arrest of the Martinelli Linares brothers, on Panamanian soil. For Odebrecht, the bond is $5 million each; for New Business, for $ 2 million.

Two weeks ago, Luis Enrique had requested permission from Panama to return to the country, with his wife and daughters, on a private flight.