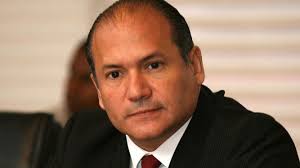 The high priced legal team of Ex-president Ricardo Martinelli has filed a criminal complaint against the of former Supreme Court Judge  (CSJ), Harry Díaz, for collusion, to the detriment of Martinelli, and demands a payment of $ 10 million for alleged damages.

The former president's complaints against Diaz and other judges have been described as seeking to intimidate justice.

The complaint - filed by lawyers Jamis Acosta and Alejandro Pérez - states that the ex-magistrate violated article 46 of the Penal Code, which establishes that the public servant of the Judicial Branch or the Public Ministry who by fraudulent means utters any resolution manifestly contrary to the Constitution or the law so as to cause damage, will be punished with a sentence of five to ten years in prison.

Díaz served as a prosecuting  magistrate in the process followed by Martinelli for alleged political espionage and embezzlement.

Martinelli was imprisoned and extradited by the United States at the request of the CSJ. The case left the sphere of the Court when Martinelli resigned as a Central American parliamentarian. In August 2019, a panel of three judges declared him " not guilty ", a decision that is being appealed.

According to the complaint, the fiscal hearing that Díaz prepared on October 9, 2015, in which he asks for up to 21 years in prison for Martinelli, “was carried out in total absence of the procedures established in articles 5 and 280 of the Penal Code and that the law was misused to make an accusation contrary to the law. ”

It also details that "the absence of a formal complaint in this case and having gone directly to the prosecution" caused damage to the life and honor of the former president and that the action taken by Díaz, had the "sole intention" of take it to a "legal way of the cross, without real legal foundations".

They complain that Díaz made public statements referring to the case, when it was no longer his responsibility.

Díaz – whose 10-year term as a Supreme Court judge  last December, said that a criminal complaint seeking compensation leaves much to be desired by Martinelli's lawyers.

In addition, he will be happy to explain to a prosecutor how the Plenary of the Court voted on the issue of the charge in cases involving deputies of the Republic, whether from the National Assembly or from the Parlacen.

In fact, all of Díaz's actions, as prosecutor of the case, were endorsed by the then magistrate judge of guarantees Jerónimo Mejía and by the plenary of the Court.