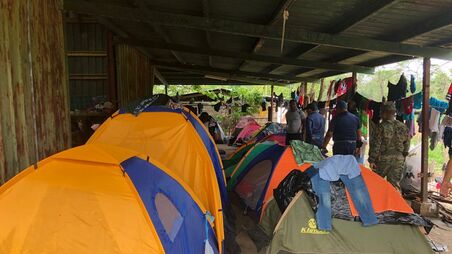 Panama’s Ministry of Health (Minsa),  has announced an inter-institutional team led by doctors and nurses to care for migrants camped in   Darien waiting to continue their trek towards the United States.

The Ministry ns other government entities, made a tour in the community of La Peñita de Darién, to check the health and safety situation of thousands of migrants who are passing through the province. 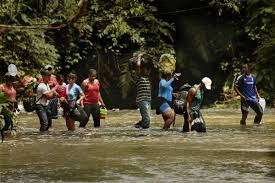 To date at least 25 migrant deaths have been recorded, while others have disappeared in the jungle or been swept away in rivers.

After the tour, the Ministry announced that in the coming days will join an inter-institutional tour will be held in the camp, where migrants will be treated in a comprehensive manner, emphasizing the health needs of the people.

According to the Ministry, there are currently at least 1,200 people of both sexes, from different countries and continents such as Africa, America, and the Middle East.

"The tour saw a large number of minors and pregnant women who risk their lives with their families to reach North America," said the Minsa statement.

Health Minister, Rosario Turner, gave instructions for l doctors and nurses to lead the medical tour, in order to care for these migrants who require "as soon as possible effective, timely, dignified and humane care".

eugenie There is truth in your comment. I favor humanitarian care for the migrants, and have personally contributed to their basic needs. My pastor and I plan to visit and bring supplies to the camp near Paso Canoas. On the other hand, do you think the US can and should control how many migrants are admitted? I do.

Considering the history, and state, of our current world order, it is worth remembering that nearly all families in the U.S. are there because of a need or desire to escape oppression, inequality, illness, war, environmental degradation, or any of a number of other destructive influences, from somewhere else in the world. Ask the only Native Americans, and they'll confirm this. To label those on our borders as invaders, is to discount the misery they flee, and to send them back is to condemn them to endure whatever it is. It is only the luck of the draw that put them where the were, and us where we are. Does that entitle us to expect they accept their misery, and our lack of it, without attempting, asking for, some relief? The cautionary tale in these circumstances, is that they have been deliberately engineered to pit us against each other. While we, in our fear of losing more of what we've been losing for decades, are distracted by our villainization of those who already have, we are failing to observe the source of the collective problems. Will you ask for help when your country has no water, no food? Would you consider going somewhere that does have water and food? What do you expect will happen when the coral reefs are dead and the entire food chain of the oceans dies as a result? What will happen when more of us are refugees than those of us who live comfortably? It is not just our neighboring countries that are under threat and deprivation. IT IS ALL OF US. The plight of those already suffering, is a resource that needs to be harnessed in the service of us all. It is only our sheer numbers that enable us to overcome the greed, hubris, and self indulgence of those who, for their personal profits, have created these circumstances for the rest of us. They have the capital, they have the resources. All we have is US. It is right to welcome and assist refugees.

Caring for the INVADERS? Why not just send them back to where they came from?

Seems much worse than the southern US border situation.