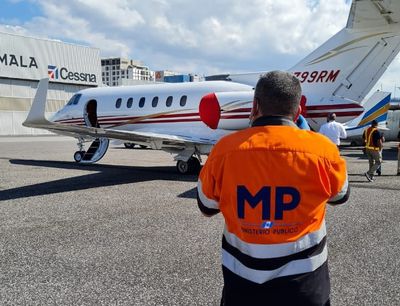 Guatemala has ordered the seizure of the private plane belonging to the family of former president Ricardo Martinelli.

The plane had been detained last February at the La Aurora airport at the request of the United States.

The information was released by Canal Antigua de Guatemala, which said that the seizure was ordered on September 2, by the Domain Extinction Court.

The journalist Sergio Osegueda, from Canal Antigua, wrote that with this action, the Public Ministry of Guatemala, through the Domain Extinction Prosecutor's Office, “could request that the aircraft pass into the hands of the State of Guatemala if it is determined that there are no anomalies in its acquisition ”.

It is the same plane with registration N799RM that was waiting for Ricardo Alberto and Luis Enrique Martinelli Linares, when they were detained in La Aurora, on July 6, 2020, for an extradition request from the United States.

The  US Department of Commerce had requested the seizure of the plane an action that the National Civil Police carried out on February 26 of this year. That kidnapping was carried out by the Prosecutor's Office against Drug Trafficking.

The aircraft, with a capacity for 15 passengers was acquired in 2005, is registered to the Bank of Utah Trustee, of Salt Lake City.

Ricardo Alberto and Luis Enrique Martinelli Linares remain detained in the Mariscal Zavala military prison, waiting for their delivery to the United States to be determined.

The prosecution for the Eastern District of New York has filed three charges against Ricardo Alberto and Luis Enrique: one for allegedly conspiring to launder money, and two more, for hiding information about money laundering.

Luis Enrique faces two additional charges, for the alleged use of money obtained through money laundering.