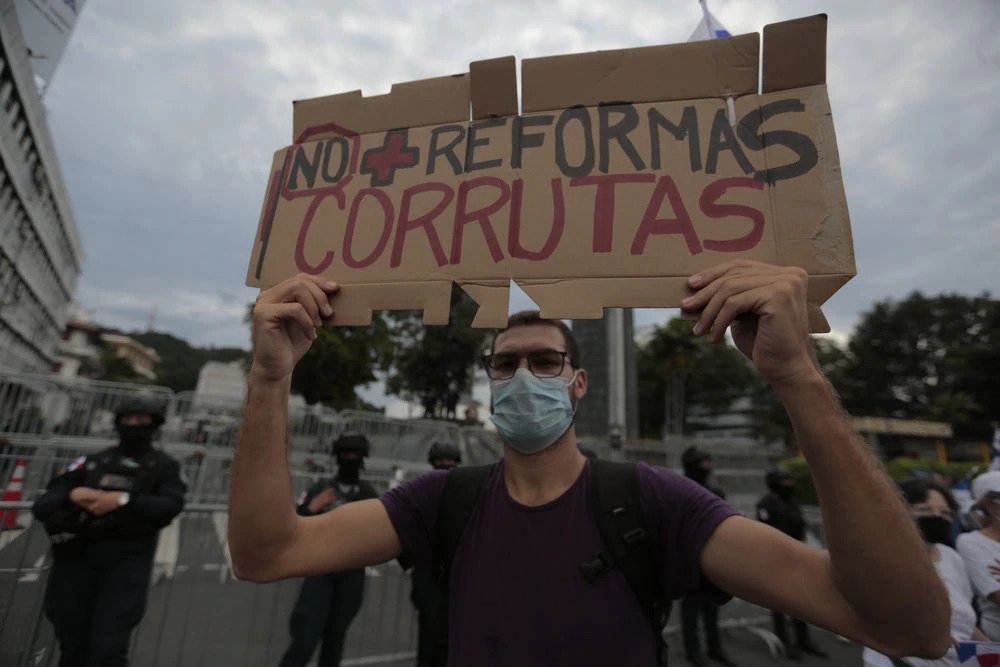 The “Mesa Ciudadana”, a citizen group in defense of democracy, called on the general public to support the call for a march that will begin at 4:00 pm on Wednesday, October 20, from Parque  Porras towards the Cathedral.

The call for union groups also includes causes such as the defense of the Social Security Fund and a halt to corruption in all spheres, issues that should unite all sectors, said the "Citizen Table" in a statement.

The group indicated that those who cannot participate in the  march should assemble in Plaza Catedral (near the Presidency), from 5:00 pm to 7:00 pm

Simultaneous activities have been scheduled for that day in Chiriquí, Veraguas, Los Santos, Herrera, Coclé, and Panama Oeste.

Panama: Captain, the $50 million restaurant / Fourth Bridge part of the deal! $50 million restaurant and Fourth Bridge construction was part of the construction contract. What do you think China and former Panama president Varela would secretly negotiate? $50 Million China restaurant (spy headquarter with Cuba / Russia and... Italian head banker Ferrugia along with former president Martinelli U.S.A. Florida mansion. Italians are very, close nit with the love of grand luxury ideals for the Panama Canal Expansion. China cannot be underestimated and they are control freaks both land and sea with missiles ready to strike international space satellites! That is why U.S.A. Elon Musk is under orders to launch multitudes of Satellites! China has attempted a few tactics with Panama with their well-established China Bank. They mean to buy-out Panama's businesses and properties with predatory loans. China obviously needs a major headquarter of very high stakes in a geopolitical sphere. China knew the Covid-19 could be used as a weapon and kept it secret. Documentary video explains the Covid - 19 spikes are more suited for connections with humans. That means... China engineered the Wuhan laboratory for a global attack, for purposes of inflicting diseases to the mass! China has the means to engineer immunity for their race in the foreseeable future. China is serious and wants Taiwan with a strategic global purpose. Do you really think that I believe China will build a restaurant on a Fourth Bridge project? Fourth bridge will not support the weight and it will obviously collapse immediately! China and Panama will be an embarrassment and a laughing stock for their investors. China wanted the Amador Causeway, perhaps for their headquarter and... $50 million restaurant. Next to the Cuban / Russian alliance with a sophisticated headquarter operation with... Italians head banker Ferrugia and Martinelli! Italians need to work fast to establish a credible legitimate Italian / Panama government to establish their relationship with the China / Cuban - Russian alliance. China can easily throw in another $50 billion into Panama $25 billion economy and gain massive influence for a China - Russian - Italian - Cuban luxury community with a mass exodus of Panamanians, imagine the wealth! This is not just about a $50 million China restaurant; it is a tool for warfare and technological control for hypersonic nuclear missiles and computer hacks at all government levels! Once Panama is controlled by major foreign influence there could only be... [Major Wars]! Panama will be warned to flee the immediate area and the Chinese war ships will definitely be targeted by the United States... U.S. nuclear submarines and the Star Wars Program. Just a $50 million China restaurant... Think in terms of global war and you may just grasps the whole sea, land and space nuclear fireworks in actions besides... Yanibel Abrego's fireworks and barbeque for self-enrichment schemes of selling Panama dirt. Possible nuclear burnt dirt may offer a higher value if Yanibel and president Cortizo could get away with this! The new partnership of Panama nuke's cement and fertilizer!

George ..you have an unhealthy fixation on Chinese restaurants …let it go . We know you try every post to work it into the dialogue but spare us any more comments please. It’s not even being built which actually I think is a shame because a restaurant atop the bridge looking out on the canal would have been a great idea and very popular with tourists. Anyway, enough of the restaurant eh George ?

Panama: The - Real - Corruption Target Point. Who are the real bad guys in all of this? Bad guy mafia leaders or mafia wannabe are... FINANCIAL INSTITUTIONS AND CONSTRUCTIONS CONTRACT COMPANIES! They are the guy that motivate corruption with first... briberies and money launderings. Any politician will be tempted with a large undisclosed... money bags by hidden front men. So, that means... Odebrecht and Yanibel Abrego who has the authority to access state funds for the president and their cohorts. Martinelli's sons who will motivate more crimes for their payments as intermediaries. Martinelli's big projects who will interest the banks and they will pay for more large projects even offering undisclosed money whenever he walks in and says the magic words, the... BOSS! Martinelli and his cohorts do not do this on their own. Actual money holders looking for corrupt easy money will look the other way to grease their palms. Former president Varela who is motivated by a contract with China's $$$'s - $50 million restaurant. Your own banks and contract negotiators are all part of this and they hide like little rabbits. Yanibel Abrego / Martinelli sorry to say but it's true. YANIBEL ABREGO / MARTINELLI - 2009... DOUBLE DIPPING. Look what happened in 2009 when Martinelli was elected president... DOUBLE DIPPING FOR ALL MAYORS AND GOVERNORS AND PLENTY OF POLICE CHIEF BONUSES! It all starts with... money and more money leads to Mafia underground... [SLUETHS]! MONEY... POWERFUL LAWYERS AND BOUGHT AND PAID FOR LEGAL SYSTEM! Panama's society is governed by the criminal laws of fixing the state funds for purposes of power and rigged elections for the continuity of... FREE MONEY! LIKE TAKING CANDY FROM A BABY WITH FIRE WORKS DISPLAY AND BARBEQUES AT... YANIBEL ABREGO EXCAVATED PROPERTY FOR THE SALE OF PANAMA'S DIRT. HER OWN PROPERTY DESTROYED WITH THE SALE OF $MILLIONS$ IN PANAMA DIRT WITH THE PANAMA PRESIDENT CORTIZO. THOSE ARE ACTUAL JOBS BELONGING TO PANAMANIANS! YANIBEL IS THE MASTER MIND WITH MARTINELLI AND PRESIDENT CORTIZO'S CORRUPTIONS!!! PANAMA PRESIDENT CORTIZO AND HIS THREE UNCONSTITUTIONAL ADVISORS... "I CAN DO WHATEVER I WANT"! EVEN IF IT MEANS SLAPPING AND PUNCHING AND KICKING THE FORMER PANAMA PRESIDENT'S BROTHER! EVEN IF IT MEANS GETTING HIMSELF (MARTINELLI) RE-ELECTED BY CORRUPTION MEANS! This is not an exaggeration, banks are involved with the Mafia or they would not have given MARTINELLI UNTOLD SUMS OF MONEY SIMPLY BY WALKING INTO THE BANK AND SAYING... THE BOSS!!! (That just does not happen, it does not happen but it did)! What kind of a banking system is running Panama with international investors? Now, this prolonged grey and black list? Bank executives should be named in the Pandora Papers and investigated!!!