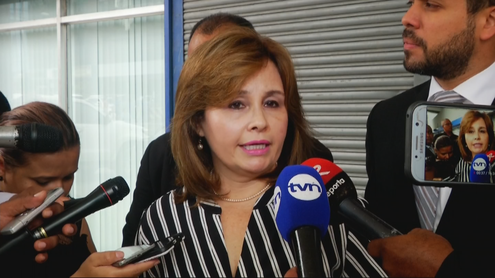 Panama’s Attorney General Kenia Porcell has filed a criminal complaint against PRD deputy, and vice-president of the National Assembly Zulay Rodríguez, for an alleged crime against honor.

Rodriguez, who has a penchant for attacking high profile figures while addressing the assembly had earlier been accused by the Panama Canal administrator of sheltering behind her parliamentary immunity

Porcell went personally to the Court on Tuesday, August 20, 2019, to file the complaint. She was accompanied by  Rolando Rodríguez and David Díaz, secretary and deputy secretary-general of the Attorney General's Office. At the time, the court was packed with journalists who had attended a citizen protest against corruption.

Rodriguez is a critic of Porcell's management. The deputy said, for example, reports La Prensa that the prosecutor did not want to investigate the actions of the government of Juan Carlos Varela (2014-2019), as part of the file for the bribes that Odebrecht paid in Panama. The investigation is paralyzed and the Second Superior Court of Justice denied extending the extension to investigate, as requested by the attorney and the Special Anti-Corruption Prosecutor.

On Tuesday, Porcell defended the impartiality of the investigations. "Prosecutors have done their job in a consistent manner," she said.

Her complaint is accompanied by "evidence that requires a crime against honor." said Porcell.