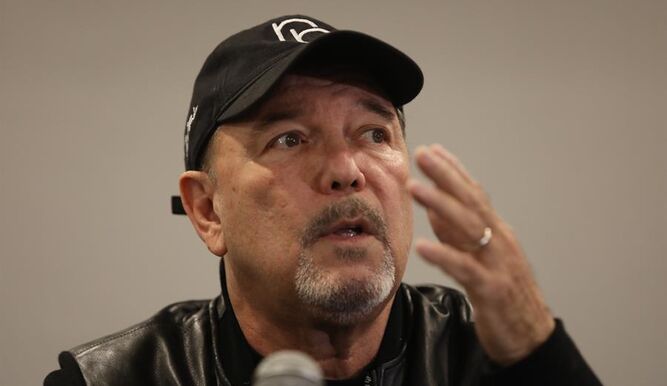 On his social networks, he said the denial of this right was completely out of date. “Denying that possibility violates the civil rights of those who wish to formalize their romantic relationship, to exercise the powers they possess as citizens and as individuals," he argued. The world celebrated artist.

The marriage of people of the same sex entered into force on  Tuesday in Costa Rica, making it the seventh American country to approve it and the first in Central America.

"I congratulate Costa Rica for overcoming useless, indefensible prejudices for rational minds. And it is another 'ethical' example worth following, as is its recent inclusion in the prestigious OECD group" said  the former Minister of Tourism in the Government of Martín Torrijos (2004-2009).

He recalled that in Panama, equal marriage still "unleashes a shouting that, unfortunately, is not heard as a protest against the corruption and mediocrity that infects our institutions, and our society."

demonstrations for "the absence of justice", and added as an example the Odebrecht scandal, the cases  "against public officials accused of bribery, and  injuries to the national treasury".

Panama is between two countries (Costa Rica and Colombia) that legalized same-sex marriage, and must also "allow its legal existence in the Republic of Panama," said Blades  the winner of 17 Grammy Awards.

Cicero3 shows her lack of knowledge once again. I have read Genesis many times and that is expressively why God destroyed them. Sure there were other reasons like tolerance of it, among other things but homosexuality was the primary reason. Gen 19:5 shows us this. It is not only recorded in the Bible but other ancient manuscripts as well. There are many places in the Bible that condemn it. No matter how hard you try, you will not twist those facts. Better go with the theory that the Bible is not real. It makes a better argument for you. Read 1 Cor 6:9.

He is trying to virtue signal and get the attention of any awards committees it's no longer about talent or product it's about being "woke". Guys a mediocre hack who got awards through affirmative action. They gotta give awards to a certain amount of latinos so he just has to get their attention to get one.

The freedom of gays to marry is not "destroying" Canada, Europe or the USA. Costa Rica will survive it as well. It's not "'special" rights, it's equal rights. Sodom was not destroyed because of consensual gay sex. If Snake would read the account in Genesis, he would see that.

Correct Snake. Here is one of many links that will prove his point. https://dailycaller.com/2020/05/26/alliance-defending-freedom-college-track-idaho-preventing-transgender-athletes-female-sports/ You don't have to be religious to see these problems. Nothing natural about it.

@ euginie. Typical left wing. Wants drugs and blatant homosexuality. Funny how the few expect the many to turn around and support their cause. Nothing makes me more sick than to see two men kissing in public. Keep those queers in the closet. They do not want equal rights. They want extra rights for being a pervert. Once you start down that road, you will not get back to normalcy. They are destroying the USA and they will do the same in Panama. Do not give them an inch. Boycott this Ruben Blades and everyone else that bows down to their agenda. Remember Sodom. That is where the word sodomy comes from. It was against the law in the USA until Bill Clinton bowed down to them. Now it is trouble at every turn trying to keep them happy. They are never happy. Always wanting more like leaches.

A great step forward, acknowledging we are all as diverse as the rest of Nature, and overcoming prejudice against anyone who is not a clone of ourselves. Opening minds to the big picture is very ethical. And now, since we're contemplating rational minds overcoming useless, indefensible prejudices in protest against the corruption and mediocrity that infects our institutions, and our society, it is also time to decriminalize drugs. We've been sold a story about drugs that creates a picture as prejudiced as that about sexuality, but it's even more evil because it is also a story of corruption for the sake of creating profit. Those in power have created artificial law against plants, again contrary to natural law, not for the sake of their prejudice, but for the sake of their profits. Who benefits from the criminalization of drugs? Only those who promote the laws against them. Do these laws protect any of us from anything? No, they do not, but they do create an environment that subjects all of us to police intimidation, gangs, gang warfare, and incarceration of those attempting to obtain part of the immense profits created by the prohibition. We have always had the right to not use these plants if we didn't want to, now all of us are deprived of their benefits, and many lives are damaged, for the sake of profits for the corrupt. If our intent is to be an ethical society, the laws against the plants classified as drugs, must also fall.