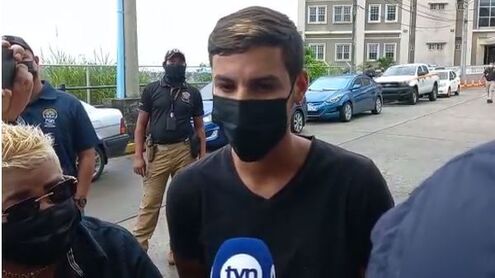 Yaísmo Felipe Possu Mera,  who has a $10,000 reward price tag on his head for his alleged involvement in the assassination of the political insider and former deputy director of the Public Registry, Agustín Lara, turned himself in on  Saturday, afternoon November 27.

He was accompanied by his lawyer, Sarai Blaisdell who said he is innocent since he was only identified by a protected witness who has said that he has seen him directly, “however, something so elementary in its characteristics has not been able to point out, since it does not have the characteristics indicated at the time of the statement by the protected witness ” referring to a scar and a tattoo.

According to Blaisdell, the delay in going to the authorities was because "obviously he needed an effective defense."

Possu Mera, affirmed that he is innocent, that he has nothing to do with the murder a d that he did not appear before because he felt fear and wanted a good defense.

When questioned about where he was during all the days prior to his delivery, the accused indicated that he was kept in hiding for fear of the reward and that he would be tried without a worthy defense.

He pointed out that he has been in the country for between 7 and 8 years, has children born in Panama, and has worked as a courier and as a construction assistant.

Agustín Lara died from multiple shots at the time he was in the San Miguelito district, in political activity of the Democratic Revolutionary Party. One person is kept under provisional arrest for the crime.