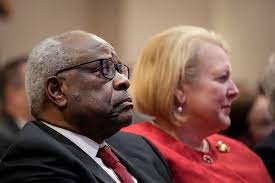 The current US Supreme Court boasts an ultraconservative majority (6 to 3)—won by political trickery and trickery—that is committed to dismantling American liberal democracy. While it's easy to blame the extreme right-wing swing of that high court on former President Donald Trump , it's actually the result of a concerted effort by the Republican Party, conservative evangelicalism, and major business interests profiting from the retrograde movement. of the hands of the social clock.

After World War II, when American society faced the great task of social and economic integration, the Supreme Court played a leading role in opening the door to those changes that constituted the foundation of modern liberal democracies, societies in which that the majority elects the government, but minorities develop without fear of losing their rights.

The Supreme Court of the United States ordered through the 1954 Brown vs. Board of Education ruling that all public educational facilities must be available on an equal basis to African-American students, as well as to white students. The unanimous ruling caused a schism with the southern states and with the most conservative sectors that have since begun their campaign of resistance against the Supreme Court.

This was followed by the rulings of emblematic cases such as Sullivan vs. New York Times of 1964, in which the Court established the doctrine of actual malice in cases of slander and libel. In that same decade, in 1966, the Court decided the Miranda vs. Arizona case, from which universal principles of due process and the right to defense are derived. In 1967 the Court decided Loving v. Virginia, the case in which interracial marriage was legalized between any ethnic group throughout the United States. This expansion of the rights to privacy led the highest US court to recognize, in 1973, in the Roe vs. Wade case, the right to abortion of the non-viable fetus.

The undercurrent
The strident jurisprudential advances inspired pressure groups interested in obtaining the appointment of new, more conservative justices, who would stop the wave of liberal jurisprudence backed by resounding majorities of Democratic and Republican judges.

This effort had multiple battlefields. On the one hand, the electoral coalitions in the great majority of the states of the union began to push candidates for elected positions with a platform of judicial conservatism. In turn, conservative think tanks recruited young right-wing intellectuals to incubate them with the aim of inserting them into the US administration of justice. Perhaps one of the most successful elements of this strategy was the founding, in 1982, of the Federalist Society, whose intention was to promote a "textual" and original interpretation of the US constitutional text throughout society, but in particular in the main law faculties of the country.

Young students and novice lawyers who supported this judicial vision were awarded scholarships and received a significant boost to accelerate their judicial or academic careers. The movement picked up speed during the presidencies of Ronald Reagan (1981-1989) and George Bush Sr. (1989-1993), the latter being the one who nominated Clarence Thomas.

Biden's mistake
In 1991, Democratic Senator Joe Biden was the chairman of the United States Senate Committee on Judiciary Affairs. Democrats dominated both legislative chambers, with comfortable majorities. In 1987, the Democrats had rejected the appointment of the ultra-conservative jurist Robert Bork, with strong links to the Watergate case.

However, the nomination of Justice Clarence Thomas caused a split in Democratic political circles. Thomas came to the Senate with a questionable professional record serving Republicans, to complicate matters, a former assistant to the judge, law professor Anita Gill, sued him for sexual harassment. The painful Senate hearings turned into a debate about Professor Gill's credibility. In the end, Joe Biden gave his endorsement to Thomas, who was ratified on October 23, 1981.

Little by little, the change of the judicial rudder began to be felt. However, a December 2000 Supreme Court ruling —Bush v. Gore—, in which the Court agreed with candidate George Bush Jr., in the Florida electoral fiasco, and took away Vice President Al Gore from an electoral recount of all the votes in the state of Florida, gave Bush the presidency (2001-2009).

A journalistic consortium did the recount that Gore had requested from the Florida electoral authorities, all the votes in that state were counted several times, and the result was the same: the Democrat beat the Republican.

With the Bush Jr. in office for 8 years, the result was that much more conservative judges were chosen for the Supreme Court. The investment of time, lots of money, and abundant talent had begun to pay off. Although the Court continued to maintain an itch of respect for the most liberal judicial tradition, it was tightening the screws to base a reactionary jurisprudence, which tied the hands of the regulatory state, and disrupted the principles of one person one vote.

In 2010, the case Citizen United vs. Federal Election Commission was decided, by which electoral campaigns were allowed to have no limits on donations or expenses. Although in 2015 Obergfell vs. Hodges was decided, which allowed equal marriage throughout the United States, the door was already closing. In 2016, the last year of Democrat Barak Obama, the Senate, dominated by Republicans, blocked the process of appointing Obama's candidate for Justice of the Court. They didn't even allow him his evaluation hearing.

The arrival of Donald Trump in 2017 carried a powerful electoral promise to the most conservative sectors: he would appoint the judges who would knock down Roe vs. Wade. Trump was able to make three lightning appointments with the foreseeable results to date: they repealed Roe, expanded the rights to carry firearms, reduced the protection of the vote of African and Hispanic minorities, and imposed significant restrictions on the government's regulatory federal capacity.

The textualists, with their defense of the originalism of the US Constitution, insist that what is not mentioned in the Magna Carta cannot be recognized by the Court. George Washington did not know the internet, Benjamin Franklin knew nothing about the cell phone, James Madison could never imagine space travel, and none of them, as well as the rest of those who founded that republic, as well as those who wrote that Constitution, could think on how to regulate phenomena that did not exist in the eighteenth century.

The originalists want the government to leave gun owners alone, but at the same time, they want a different local, state, and federal authorities to control women's reproductive rights. It is obvious that the lack of coherence corresponds more to a fanatical movement than to a rational attempt to regulate life in society.

Although the Biden administration is likely to take an electoral thrashing in November of this year, the ultra-conservative groups' dream Supreme Court has taken it upon themselves to ensure that no Republicans return to the White House any time soon. Unless the Bush vs. Gore thing happens again.

It is very difficult to win the presidency of the United States without the votes of women, the African-American community, white men with college degrees, environmentalists, the LGBTIQ+ community, and all the other groups that have seen their hard-won rights curtailed. in almost 60 years of jurisprudence. Clarence Thomas, the judge that Joe Biden saved, is the oldest member of the Court, and therefore, the one who decides who writes the rulings of the conservative majority. His fanaticism and disregard for liberal jurisprudence saved Joe Biden the presidency.