WORLDVIEW: The dreadful simplicity of warmongers 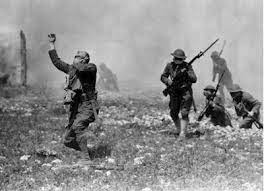 Does America know what a dangerous game its leaders have been playing? Does it know its history? And do the leaders of Europe, who should be a brake on American determination, go along with Washington because they are almost equally ignorant?

The fact is none of the present crop of European and American leaders have had time to study much history. Nearly all of them made their way upwards in their party ranks because of their skill and knowledge of domestic affairs.

They have had little or no preparation for the affairs of the world. President Joe Biden may be something of an exception as he has long been immersed in foreign affairs, but he shows little sign of knowing history in depth. Quiz him on nineteenth and eighteenth-century Russia and I doubt he can find the answer.

On the Russian side one can make the same critical argument. Ignorance reigns and history can be repeated. What does President Vladimir Putin understand about the history of slavery or the origins of democracy?

World War I was the most important geopolitical event of the last century. After forty-three years of unbroken peace in Europe, the continent slipped into war with barely a historical or humanistic thought.

The issues were there: whether or not Austrian power could prevail in Italy, the degree of influence Russia was allowed to enjoy in the Ottoman Empire, the balance of power between Prussia and Austria in Germany and that between Prussia and France across Europe. But Europe had managed these tensions for four decades until an assassin's bullet murdered Archduke Ferdinand of Austria, and leaders across Europe lost their perspective.

Without this tragic mistake of statecraft, perhaps owing more to insouciance than malevolence, there would not have been the massive carnage of 1914-18. There would have been no Great Depression, no rise of Hitler, no consolidation of the autocracy of Stalin, no World War II, no unilateral development of the nuclear bomb, and no Cold War

Yet the people of all sides enthusiastically supported a war their leaders had led them blindfold into. War was terrible, yes, but it was also necessary and sometimes splendid. It rings out in the poetry of Rupert Brooke and can be found in prose form most stirringly in Pat Barker's bitter evocation of the loyalty to the cause by the doomed young officer class of England.

Tolstoy in War and Peace made a similar point about the French war led by Napoleon against Russia. “War is here!” - cried Prince Andrey, “This is it! God, I'm scared, but it's marvelous!” Later in the day's battle, and wiser after tens of thousands on both sides had been killed, he exclaimed, “How can God look down from heaven and listen to it all?”

“But for us, the descendants of these people”, Tolstoy wrote in his novel fifty years after the war ended, “as we contemplate this vast accomplishment in all its enormity and seek to penetrate its dreadful simplicity, the explanations seem inadequate. It is beyond our comprehension that millions of Christian men should have killed and tortured each other just because Napoleon was a megalomaniac, [Tsar] Alexander was obstinate, the English were devious and the Duke of Oldenburg was badly done by......The more we try to explain away such phenomena in rational terms, the more irrational and incomprehensible they become”.

Balance of Power
Interestingly, the former U.S. Secretary of State, Condoleeza Rice, in a speech a few years ago, condemned 'balance of power' politics as outmoded and dangerous. 'We tried this before; it led to the Great War", she said.

Yet she and her president, George W. Bush tried it again. President Bill Clinton had started the movement of NATO up to Russia's border. But Bush pushed it forward attempting to encircle Russia in the South and trying to enlist India and China in the east. The policy was continued, with some variations, by the presidents who came next- Barack Obama and Donald Trump. The new president, Joe Biden, seems to be in the same mould. Last month, Jack Matlock, who had been President Ronald Reagan’s ambassador to the Soviet Union, wrote despairingly:

“We withdrew from some of our most basic agreements with Russia. We kept expanding NATO, something that the first President Bush had promised Gorbachev we would not do if he allowed the unification of Germany and Germany to stay in NATO. Step by step we pulled out of even our most basic agreements and then, increasingly, are surrounding Russia, right up to their borders, right up to beyond their borders of the former Soviet Union, with a military alliance which they are not in. Now, no leader of Russia, no leader of any other country could maintain a cooperative relationship and also a full democracy in their country under conditions of that sort”.

For what intent? The end of The Cold War was the time to stop this discredited macho diplomacy. It was a time to build a new more stable and harmonious relationship with Russia. Ronald Reagan, if he had had another term (which he told the students of Moscow university he would have liked to have), might have done it because he saw the futility of nuclear war perhaps clearer than any post-war president. But Bill Clinton, for all his intellectualism, was not much of a student of history and he did not take the opportunity. Bush and the others built on his mistakes.

The American electorate before it votes again needs to study some history. So too do the candidates. So do the media, whose job it is to explain history but too rarely does. And so do the European leaders, both of the West and East. Only then can we avert a new Cold War with all the "dreadful simplicity" it would bring in its wake.

I agree with JP entirely. But success in this vein requires real statesmen, men or women, possessing of a true global perspective coupled with a will and a heart to get past the extreme BS and partisanship that so infects today's leaders. Anyone whose first retort is "I alone can fix it" should be immediately tossed to the trash heap. Unfortunately the electorate is generally so partisan and ignorant of facts, someone like that has appeal to too many. The West is going through a transition that it is not handling well. Govts are corrupted by short-sighted and selfish politicians whose only goal is power, without a thought being given to how that power can be wielded to benefit their citizens. Look at Panamanian deputies, look at the insanity of el loco, look at the repubs in the US who chase power like rapacious wolves at any cost. And who suffers? The people. The condition of man, driven by a "desparately wicked" heart, is a path to sadness and destruction unless checked.

Pure wisdom my friend. Thank you.

Pure wisdom my friend. Thank you.