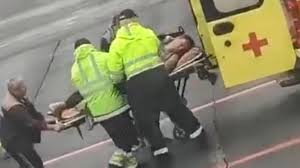 Take the strange case of Alexei Navalny, the Russian dissident, who many think nearly died from a poisoning ordered by the Kremlin.

After sifting through the conflicting evidence I was suddenly struck by a couple of sentences in a novel I’m reading right now,  “The End of the Affair”, written by Graham Greene, widely considered to be one of the great writers of twentieth-century English literature.

“Does truth lie at some point in the pendulum’s swing, at a point where it never rests, not in the dull perpendicular mean where it dangles in the end like a windless flag, but at an angle, nearer one extreme than another? If only a miracle could stop the pendulum at an angle of sixty degrees, one could believe the truth is there.”

Indeed, it will be difficult to get a straight up and down answer to who did it. Germany, where Navalny is now being treated in hospital after his near-death experience on a Russian passenger aircraft, has accused the Kremlin of being behind the poisoning. The Kremlin in repost denies this and says the West is using the incident as yet one more way of undermining Russia’s reputation.

But might the truth lie somewhere in between at an odd angle- perhaps an individual political opponent from Tomsk, the capital of a big oil and gas producing region, where Navalny was campaigning in the local elections the day before he boarded a plane to Moscow- the opposition trounced Putin’s United Russia Party.

Or a hit-man hired by one of the many people who simply hate Navalny. After all we saw something similar to the murder of the Swedish prime minister, Olof Palme, in 1986, when an unknown individual, acting on his own impulses, shot Palme dead in the street as he emerged from a cinema. There were many people in Sweden, including some in the police, who hated Palme for his left-wing views, his decision during the Vietnam war to give refuge to deserters from the US army, his refusal to enter Nato, his pro-Fidel Castro stand and his economic policies whereby the better off were taxed more and more to provide services for the poorer. The police, acting unconscionably slowly, didn’t throw up roadblocks in the city’s main exit roads until well after the murder took place. It seems we will never know if that was connivance or inefficiency, despite multiple investigations.

An interesting analysis of the Navalny affair has been made by Craig Murray who was the British ambassador to Uzbekistan from August 2002 to October 2004. He writes on the web-page of Russia Today, a Moscow-based television station.

He begins by clearing the decks, “I have no difficulty with the notion that a powerful oligarch or an organ of the Russian state may have tried to assassinate Navalny. He is a minor irritant, not remotely as politically important in Russia as he is portrayed by the Western press, but not being a major threat does not protect you against political assassination in Russia.

What I do have difficulty with is the notion that if Putin wanted Navlny dead he would not be alive in Germany today. If Putin had wanted him dead, he would be dead.” A bullet to the head would have done the deed and would have worked instantly and left no trace as to its origin. There are many well-trained Russian sharp-shooters who never miss and the opportunities to shoot him were plentiful- as, like with Palme, in a street where there were ample places to run away to.

It seems difficult to imagine why a government-hired assassin would want to see his victim falling ill during a flight. And if so would the Russian state have allowed the plane to make an emergency landing to be met by an ambulance who rushed him to a hospital where everyone agrees the doctors saved his life? Why then would the Russian state allow him to be transferred to Germany for specialized treatment when he could have been treated in a top Moscow hospital? Then the Germans would not have been at liberty to publicize any diagnose they chose to and in fact did so with the charge that he had been poisoned by novichok.

Novichok is said rightly to be the creation of military research in Russia. But it has been manufactured outside Russia. According to Wickipedia, "In the 1990s, the German Federal Intelligence Service (BND) obtained a sample of one Novichok agent from a Russian scientist, and the sample was analysed in Sweden, according to a 2018 Reuters report. The chemical formula was given to Western NATO countries, who synthesized it then used small amounts to test protective equipment, detection of it, and antidotes to it."

So what other theory works? The US is very much concerned about the market for liquefied gas to Europe and feel their shale oil industry will be threatened by the Russian/German/Dutch/French -financed Nord Stream 2 gas pipeline, now nearly completed, that will bring gas from Russia to Europe. The US is also worried about the impact this will have on its allies in the Arab Gulf.

The US and Saudi Arabia have every reason to instigate a split between Russia and Germany. So perhaps an American agent is behind this attempted killing?

There are other theories, some of which emanate from Russian government bodies and media. A lot are nonsensical, such as blaming his sugar level.

What we need is clarification if we are to get to the truth. Why don’t the Germans make the results of their toxicology and other tests available to Russia and the World Health Organization?

Yesterday it was announced that labs in France and Sweden had confirmed the German results, but these are Nato members. (Sweden is not de jure but is de facto.) Are the Germans and its allies hiding something and trying to use this incident to seriously wound Putin’s reputation? There can be no rational reason for not sharing their tests on Navalny, yet much of the Western press seems to refrain from posing the question why it has not been done. The Nato membership, ever since it broke its promise to the Soviet Union not to expand Nato to Russia’s frontier, seems to have had a consistent policy of bashing the Russian role in international events, whatever the facts.

I find it hard to believe Chancellor Angela Merkel would engage in such subterfuge, but now I’m having serious second thoughts. She must come clean if she wants Germany to be believed.

For the moment the truth hangs at an angle to the perpendicular. We need to straighten it up.