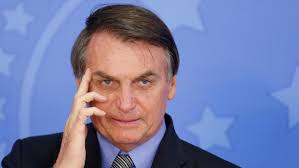 Two tweets from the account of Brazil’s extreme tight  President Jair Bolsonaro in which he questioned measures of social isolation to contain the spread of the coronavirus were removed on Sunday night on the grounds that they "violated the rules" of the social network.

He  had published three videos in which he was seen to be contrary to the guidelines of his Ministry of Health, strolling through Brasilia on  Sunday, approaching followers in small crowds and reinforcing his call to break the quarantine.

Two of the three posts were removed Sunday night, and a tag explaining their removal remained in its place.

"Twitter recently announced worldwide the expansion of its rules to reach content that eventually goes against public health information directed by official sources and may place people at greater risk of transmitting covid-19," the social network said in a statement. to the media.

"What I have talked with people is that they want to work, what I have said from the beginning, we are going to be careful, over 65 years old stays at home," Bolsonaro told a street vendor in one of the deleted videos.

Less than 24 hours earlier, the Health Minister, Luiz Henrique Mandetta, had once again highlighted the importance of social isolation in the fight against the disease, which in Brazil has  4,256 cases and 136 deaths.

"Death is there if God wants. We just can't stand still, there is fear because if you don't die of the disease, you starve," says the vendor to Bolsonaro, who replies, "You're not going to die."

The 65-year-old far-right president also promoted the use of hydroxychloroquine to treat the coronavirus. Relying on "a French study," the remedy "is a reality," Bolsonaro said.

When consulted, his  advice did not specify which study he was referring to.

In a fourth video the president, who advocates a "return to normality" in the country, questioned the quarantine defended by governors and some mayors as a containment measure to prevent the spread of the virus.

"That horizontal isolation, if it continues like this, with the amount of unemployment, later on, we will have a very serious problem that will take years to resolve," he said in the piece taped outside the official residence.

Bolsonaro describes the new coronavirus as "a flu" and advocates the reopening of shops and schools, and the isolation exclusively for people over 60 (those most vulnerable to the disease), without explaining how this could be done.

Hi Gordo, thank you for sharing your opinion with us. T quote W. Edwards Deming " Without data you are just another person with an opinion". To help you to have an informed opinion here is a link to a YouTube channel that uses actual data and applies basic mathematical extrapolation techniques to the data to make predictions. https://www.youtube.com/watch?v=fPeRF2mWi30 If after watching this video you still hold the belief that Covid 19 is no worse than the flu I can only conclude that you are an idiot. Don't worry about though, me thinking you are an idiot is only my opinion. To paraphrase what I quoted before, opinions without date isn't worth a sack of shit.

Lastly every thing I stated in my first post is true. $2 trillion bailout in the U.S. alone. Freedoms and liberties are suspended. The pharma money grab is about to happen. The virus is real and people will die from it. But the government's draconian reaction to the virus is a complete hoax and a money and power grab.

dash: If you are too lazy to view the url I posted earlier here is an excerpt: "This suggests that the overall clinical consequences of Covid-19 may ultimately be more akin to those of a severe seasonal influenza (which has a case fatality rate of approximately 0.1%) or a pandemic influenza (similar to those in 1957 and 1968) rather than a disease similar to SARS or MERS, which have had case fatality rates of 9 to 10% and 36%, respectively." Before you call people liars show some respect and ask for a link if you can't find it yourself.

here you go dash: https://www.nejm.org/doi/full/10.1056/NEJMe2002387 World Health organization states that influenza related deaths range between 250K to 500K annually (don't be lazy and look it up yourself). As of March 31 Covid-19 deaths are 41,000 worldwide and not even close to the seasonal flu. As covid-19 peaks soon and tapers off it will be on par with seasonal flu deaths.The Sweden is taking the sensible approach. Look them up. They are logically based and not political. All governments want to do is use fear and panic to take your money and freedoms away. That is a fact. Denial and your inability to handle the truth will lead to your own enslavement.

Gordo, Following your dear leader, you simply lie. There was no such article in NEJM. As always the truth is unacceptable to ideologues.

Since when has flu killed 200,000 Americans a year? It's a banker conspiracy?? Denialism and conspiracy theories lead to more desths.

Mr. Bolsonaro is correct and sensible. The death rate from covid-19 will be on par with a severe seasonal flu according to The New England Journal of Medicine March 28, 2020 article co-authored by Dr. Antonio Fauci himself. There is a dark ulterior motive behind this plandemic and one should not be blind to it. At minimum it was a money grab by the central bankers who will create $ trillions in debt globally. That debt and interest will be owed by the taxpayers in every country who offer bailouts. Also our freedoms and liberties have been stripped away instantly. Our constitution has been suspended, possibly indefinitely. We the people need to think for ourselves and assess the situation and not blindly follow the media script.