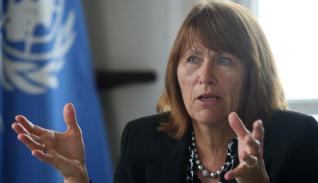 The UN announced on Sunday the resignation of the executive director of its Office for Project Services (UNOPS), the Norwegian Grete Faremo after The New York Times published a report on the agency's finances, investigated internally for "possible irregularity.”

UN Secretary-General António Guterres accepted Faremo's resignation and appointed Dane Jens Wandel, until now the special adviser on reforms, as interim director at the organization's main infrastructure agency, according to a brief statement from his spokesman that did not include the reasons for the resignation.

The New York Times on Monday published in its print edition a story about a loan of some $61 million authorized by UNOPS officials to a British businessman, David Kendrick, who they allegedly met at a party and who may have incurred defaults amounting to $22 million.

The UNOPS money in question was the result of a surplus of commissions paid by other agencies, which Faremo and her number two, the Ukrainian Vitaly Vanshelboim, on administrative leave, wanted to use for loans to lucrative projects in developing nations, indicates the newspaper.

According to the Times, the agency also gave a $3 million grant to a conservation group led by Kendrick's daughter, who was a recent graduate and had recently formed her NGO, in a side story that casts doubt on the justification of that collaboration and payment.

The head of Management and Reforms of the US mission to the UN, Chris Lu, echoed the resignation on Twitter and called for a "wide review of the business model, governance structure and staff" of that agency, as well as a new leader who "demonstrates a strong commitment to reform."

In addition, Lu pointed out that the UN has "completed an investigative report on possible irregularity" and demanded that it be published "immediately", considering that UNOPS managers "did not heed clear warning signs, did not do the necessary supervision and took unacceptable risks with funds" from the agency.

The Times points out that Kendrick, who has ruled out irregularities, received the $61 million in loans for projects from three companies she owned, two of them dedicated to renewable energy and domiciled in British Gibraltar, and another dedicated to the construction of houses in developing countries, domiciled in Spain.