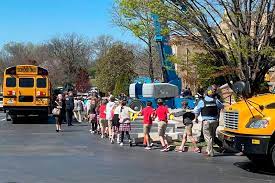 The president-elect of Brazil, Luiz Inácio Lula da Silva, lamented on Friday the death of a student and two teachers from two schools in the city of Aracruz, attributed to a young man who fired indiscriminately and remained a fugitive.

Lula said that he received the events "with sadness" and expressed his "solidarity with the relatives of the victims of this absurd tragedy", which has not yet been commented on by the current president, Jair Bolsonaro, who will leave power on January 1.

The two attacks on the two schools, in the same neighborhood of the city of Aracruz, in the interior of the state of Espírito Santo, occurred Friday, during school hours.

The Secretary of Public Security of Espírito Santo, Márcio Celante, told reporters that the deceased are two teachers and a primary school student. Another eleven people have suffered injuries of varying severity and have been transferred to hospitals in Aracruz.

The person responsible for the crime was a teenager who, with a semi-automatic pistol, fired first inside a school, then went to another, in the same neighborhood, to repeat the attack, and then fled.

According to Celante, the young man broke the padlock on the door of the first school and, during a break between classes, went to the teachers' room, where he opened fire on the teachers, killing two and wounding nine
brazil bolsonaro lula
Share
Previous Post
Cracks in Nato over involvement in Ukraine war
Next Post
WORLDVIEW: The stink of corruption in Ukraine