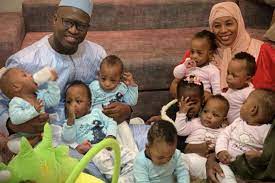 The world’s first surviving nonuplets are “in good health" as they celebrate their first birthday, their father told the BBC.

"They're all crawling now. Some are sitting up and can even walk if they hold on to something," said Abdelkader Arby, an officer in the Malian army.

They are still in the care of the clinic in Morocco where they were born.

He said their mother Halima Cissé, 26, was also doing well.

"It's not easy but it's great. Even if it's tiring at times, when you look at all the babies in perfect health, we're relieved. We forget everything," he told BBC Afrique.

He has just returned to Morocco for the first time in six months, along with their elder daughter, Souda, aged three.

The babies, 5 boys and 4 girls broke the Guinness World Record for the most children delivered in a single birth to survive.

Ahead of the birth on 4 May 2021, Mrs Cissé was flown to Morocco by the Malian government for specialist care.

Mrs Cissé and the children are currently living in what their father described as a "medicalized apartment " that belongs to the owners of the Ain Borja clinic in Casablanca where the babies were born.

"There are nurses who are here, in addition to my wife, who help  take care of the children," Mr Arby said.