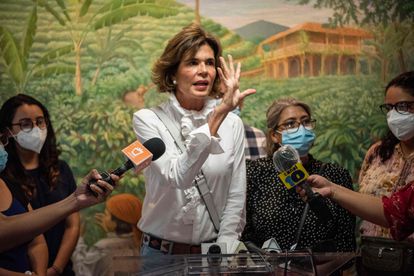 Nicaraguan opposition leader Cristiana Chamorro has been jailed for eight years after being found guilty of money laundering in a case that she claims was politically motivated reports The Week.

Chamorro was “one of seven presidential hopefuls” detained ahead of national elections last November, the BBC reported. She had been seen “by many in the opposition as their best hope of defeating” the incumbent, Daniel Ortega, who went on to win a fifth term as president with 75% of the vote.

Chamorro was detained shortly after announcing that she would run against Ortega, amid accusations of “abusive management” and “ideological falsehood” during her time running a media foundation.

Chamorro belongs to one of Nicaragua’s most famous families. Her father, Pedro Joaquín Chamorro, was editor-in-chief of La Prensa newspaper – which opposed the rule of the autocratic Somoza family from 1936 to 1979 – until he was assassinated in a daylight shooting in 1978. Her mother, Violeta Chamorro, became Latin America’s first female president in 1990, ending Ortega’s first 11 years as president.

5 Honorable People
During her money-laundering trial, held behind closed doors, Chamorro “remained defiant”, the BBC said. According to the opposition news site 100% Noticias, she accused the court of trying “to stain my name”, warning “they will not succeed”.

Her brother, Pedro Joaquín, and three former employees of the media foundation also received prison sentences ranging between seven and 13 years. Chamorro said in court that “five honorable people” were being accused of a crime they did not commit.

She joins several dozen opposition figures “imprisoned and sentenced on similar charges by Ortega’s government ahead of last November’s elections”, The Independent said. The president has “targeted non-governmental groups” across the country, “cutting off their foreign funding, seizing their offices and canceling their charters”.

A hero of the country’s struggle against the US-backed Somoza family, Ortega has long maintained that the groups he has targeted in recent years are “working with foreign interests that wanted to see him removed from office”, the paper added.

The Violeta Barrios de Chamorro Foundation, which closed down in January 2021, had provided training for local journalists while advocating for greater freedom of expression in Nicaragua.

The newly jailed opposition leader’s work running the foundation led to her being accused of promoting “ideological falsehood” and “destabilizing the government” during her trial, France 24 said.

‘Revolution eats itself’
Ortega was a key figure in the Sandinista revolution that overthrew the Somozas and became Nicaragua’s leader in 1979. After being defeated by Chamorro’s mother in the 1990 election, he returned to power again in 2007 and has remained in office since.

“Thousands fled into exile after Nicaraguan security forces violently put down anti-government protests in 2018,” Al Jazeera said. Ortega repeatedly claimed that the demonstrations were “an attempted coup with foreign backing”.

The international community roundly condemned the 2021 election, with the EU stating that Ortega’s victory lacked “legitimacy” as the vote was held “without democratic guarantees”. The bloc called on him to immediately release all political prisoners and “return the sovereignty of Nicaragua to the Nicaraguan people”.

The UK’s Global Ambassador for Human Rights, Rita French, has also attacked his government, saying that she was “deeply concerned by the deteriorating human rights situation in Nicaragua, and by the lack of progress in the political dialogue”.

French called for “the release of political prisoners”, and urged “the Nicaraguan government to end the repression of its citizens and cooperate fully with international human rights bodies”.

Nicaragua “doesn’t register much attention abroad”, wrote Alma Guillermoprieto in The New Yorker. But “in the late years of the Cold War, the world was anxiously focused on events there”. A “ragtag army”, the Sandinistas, had managed to overthrow the “dictatorship of the Somoza-family dynasty and its brutal Guardia Nacional”.

It was a “David and Goliath” story, she continued. “Progressive socialist guerrillas, undogmatic and good-looking” had defeated a powerful, Washington-allied enemy and “promised their followers” a lasting “solution to the endless problem of poverty and inequality in the region”.

More than four decades on from that victory, however, the “revolution eats itself”. Ortega has “crushed civil society” and thrown many of his “former comrades” into jail as part of an effort to consolidate his power and maintain his influence.

“For those old enough to remember,” Guillermoprieto added, Ortega’s leadership “looks more and more like the Nicaragua of Somoza, the overthrown dictator”.