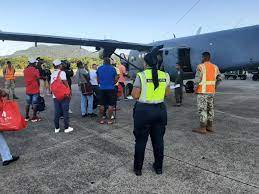 AFP, Bogota Gustavo Petro took office this Sunday as the first leftist president in the history of Colombia, before hundreds of thousands of people who supported his plan to transform an inequitable country harassed by the economic crisis and drug violence.

The 62-year-old former senator and former guerrilla was invested by the head of Congress, Roy Barreras, during a ceremony in the Plaza de Bolívar, in downtown Bogotá, attended by nine leaders and several international delegations.

"I swear to God and I promise the people to faithfully comply with the Constitution and the laws of Colombia," said the new ruler.

Petro, who succeeded the unpopular Iván Duque in power, will govern for four years a country of 50 million inhabitants that for the first time entered the orbit of the left in the region.

The one who was the leader of the opposition in the last two decades began his government with a battery of reforms in mind and the expectations of half the country that voted for him in the ballot on June 19.

Colombia thus enters a period of change, with a leftist in command, a Congress in his favor and a weakened opposition after the decline of former president Álvaro Uribe (2002-2010), the head of the right.

Petro starts from an "enviable position, with a large majority in Congress and, in terms of the street, has support that no government had before in recent years," said analyst Jorge Restrepo, from the Center of Resources for the Analysis of Conflicts (Cerac).

Diverse cabinet
Petro put together a cabinet of diverse tendencies, with women at the head of several portfolios and the mission of carrying out reforms that will begin their legislative course on Monday.

Among them is the project that will raise taxes on the richest, fine-tune collection and record sugary drinks, in search of resources for social plans.

"The level of indebtedness and fiscal deficit that we find for the next four years is critical," said Daniel Rojas, one of the coordinators of the junction commission with the Duque government.

Even so, Petro has proposed to reduce the gap between rich and poor, one of the widest in the continent along with that of Brazil, with greater access to credit, subsidies, and public education''.