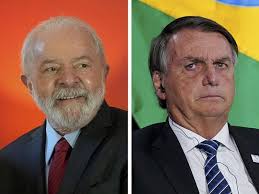 CAMPINAS, BRAZIL/ The main candidates for the presidency of Brazil, Jair Bolsonaro, who is seeking re-election, and Luiz Inacio Lula Da Silva, attacked each other on Saturday at rallies a week before the polarized elections of October 2.

The far-right president - who appears 14 points behind leader Lula in the latest Datafolha poll - participated in a motorcycle caravan in Campinas, 100 km north of the capital of the state of Sao Paulo, which concentrates the largest number of voters, prior to giving a speech before thousands of followers.

"We have completed three years and eight months without corruption in Brazil," he said to applause. "They accuse me of everything but they don't call me corrupt."

It has been a constant of Bolsonaro to describe Lula as a "thief", who was convicted of corruption in the Lava Jato case, and his sentence was later annulled by the Supreme Court due to procedural problems.

Meanwhile, the president's family has been accused of irregularities, which he dismisses.

"On this side, a person who defends the family; on the other side, a thief who says that family values ​​are a setback," settled the president, who accused Lula, a popular ex-governor of Brazil (2003-2010), of supporting the legalization of abortion, drugs and gun control.

Lula said shortly after at another rally in the São Paulo neighborhood of Grajaú that his eventual government "is not going to facilitate the purchase of weapons."

"We are going to make a revolution without needing to buy a weapon, without taking a shot. Our revolution is buying books," he responded with the phrase already used in his campaign.

Bolsonaro announced that in any case, he will "resolve the issue of weapons" after the elections.

"I am sure that all of you, if necessary, will give your lives for freedom. I repeat: armed people will not be enslaved, no one will steal our freedom," warned the president.

Lula, who called his rival "babaca" (idiot) in the speech, has another act on Saturday afternoon. His campaign appeals to the so-called useful vote to achieve a victory in the first round. The latest Datafolha survey opened that scenario: 33%-47% of the intention to vote.

"Every time a new poll comes out in which I go up a point and he (Bolsonaro) drops a point, he goes crazy. He has a migraine crisis (...), he has a pain that seems to be called Lula," launched the opponent, who promised to raise the minimum wage, improve pensions and build more homes and schools.