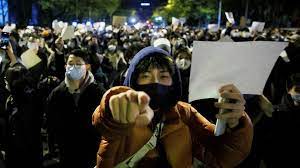 A journalist from the BBC was arrested this Sunday in Shanghai after being "hit and kicked" by Chinese police officers while recording the wave of protests against the anti-covid policies that are shaking the Asian giant.

"The BBC is extremely concerned about the treatment of our journalist Ed Lawrence, who was arrested and handcuffed while covering the protests in Shanghai," a spokesman for the state channel said in a statement.

The reporter “was held for several hours before being released. During his detention, he was beaten and kicked by the police. This happened while he was working as an accredited journalist, ”adds the letter.

During this Sunday, recordings circulated through social networks showing a man with Western features, identified as Lawrence by other journalists accredited in China, being handcuffed by the police.

In its statement, the BBC stated that it had not received any kind of explanation for what happened.

“We have not had any official explanation or apology from the Chinese authorities, beyond a statement by the officials who later released him that they had arrested him for his own good in case he caught covid in the crowd,

Shanghai is, along with Beijing, Nanjing, or Wuhan, one of the large Chinese cities where protests have been registered in recent days against the restrictions imposed by China in its 'zero covid' strategy.

Many of the mobilizations began with vigils and acts in memory of the ten people who died on Thursday in a fire in an apparently confined building in Urumqi (northwest), the capital of Xinjiang.

According to videos and testimonies circulating on social media, the outrage that flooded China's heavily censored internet on Friday turned into vigils yesterday in memory of the victims, who some commentators said spent the last 100 days of their lives in prison. in their homes.

While the official press does not report the incidents, some recordings showed how hundreds of people marched through the streets of different cities while showing blank sheets of paper representing their opposition to censorship.

The protesters chanted "Those who refuse to be slaves, rise up" -a verse of the Chinese national anthem- or 'The Internationale', shouting "we want freedom", "we do not want to do PCR tests", in reference to the obligation to scan with a mobile application the health QR codes at the entrance of any establishment or even in parks so that, when the authorities detect a contagion, they can determine who has had contact with that person at all times. EFE News Agency