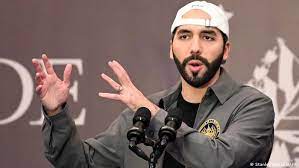 Amnesty International (AI) Thursday, June 2, asked the State of El Salvador to put an end to the exceptional regime that causes mass arrests in the framework of a "war" against gangs and warned that the policy violates human rights and could give rise to international criminal responsibility.

"Amnesty International asks the Salvadoran State to put an end to the emergency regime and immediately reverse the legislative reforms that threaten human rights," Erika Guevara, regional director for the Americas of AI, declared at a press conference in San Salvador.

The call was made by Guevara when presenting the result of a "crisis investigation" on the human rights situation in El Salvador in the context of the imposition of the emergency regime.

In El Salvador, "a serious situation of human rights violations" has arisen, summarizes the director of AI.

In response to an escalation of gang violence that left 87 homicides at the end of March, Congress, at the request of President Nayib Bukele, approved the emergency regime on March 27, which has been extended twice and will end at the end of March. of June.

The measure has allowed authorities to detain more than 36,000 suspected gang members without warrants, who are then sent to faceless judges who can extend provisional detention from 15 days to six months.

The exceptional regime also restricts the right to defense of those captured and the freedom of association.

At the beginning of April, the Congress controlled by the ruling party approved a reform to punish gang members with up to 45 years in prison.