US to end restrictions for vaccinated air travelers 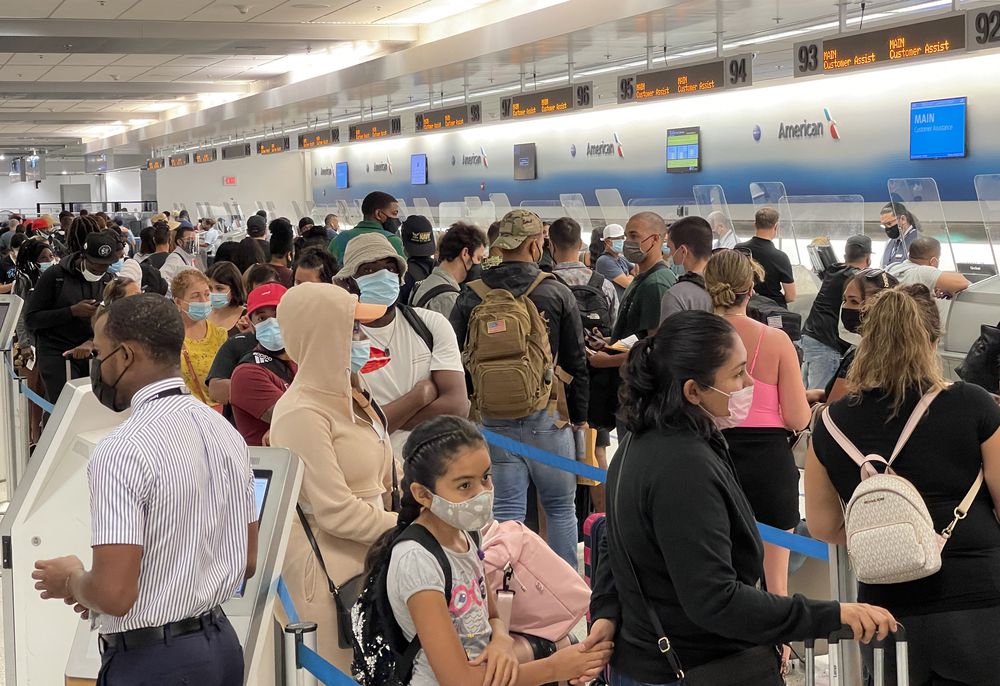 AFP,Washington -The United States announced on Monday that it will lift in November, for people vaccinated the entry restrictions into the country imposed 18 months ago by the Covid-19 pandemic, which particularly harmed travelers from Europe.

Jeffrey Zients, the coronavirus response coordinator for the government of President Joe Biden, told reporters that the measure will take effect "early November."

The easing of travel restrictions imposed in March 2020 by Donald Trump, when the coronavirus pandemic broke out, marks a significant change by the Biden government and responds to significant demand from European allies at a time of tense diplomatic relations. .

In addition, the closure of borders affected millions of travelers, including those vaccinated, causing painful personal and family situations, as well as growing impatience, particularly among Europeans.

Currently, only US citizens, residents, and foreigners with special visas can enter the United States from most European countries.

However, numerous safeguards will be maintained to prevent the spread of the virus, which has already killed more than 670,000 Americans, and which is increasing due to the Delta variant, after a sharp drop in the first months of the year.

It is not immediately clear if the new measure applies only to vaccines approved by the United States, or if it also includes those made by China or Russia. Zients said that will be determined by the Centers for Disease Control (CDC).

He added that restrictions on the movement of vehicles from Canada and Mexico will be maintained.

Zients said travelers will need to prove they are fully vaccinated before boarding planes bound for the United States, and also provide a negative Covid-19 test taken up to 72 hours in advance.

Americans who are not immunized may enter only if they exhibit a negative test performed within the previous 24 hours.

Masks will be mandatory on flights to the United States and airlines will provide the country's health authorities with contact tracing information.

The announcement was quickly welcomed by the Airlines For Europe group, which considered that "this decision will give a much-needed boost to transatlantic traffic and tourism and will bring together families and friends."

While Biden was expected to reopen borders for the European Union (EU) and the United Kingdom, the announcement covers the entire world.

Delta and Copa will will increase US flights in De...
0
US opens borders to vaccinated foreigners Nov. 8
2
Panama  remains on UK  Covid-19 red list
2

If either of you dispute the deaths from Covid go visit a ICU unit. Jose those are all cases of those who died from Covid In US and in the case of UK its all those with a death certificate/ died within 28 days of having a positive test. If you still have doubts a trip to Brazil might be educational. If after 18 months you two still doubt there is a pandemic going on then not much anyone can do to educate you and its a lost cause. Spare a thought though for the 500 kids in US who have now died out of rhe 250000 children affected there. Shame on you for denying their passing

Jose, If you GENUINELY are seeking a truthful answer then check out this link. https://ourworldindata.org/excess-mortality-covid If you read and understand the full article and graphs you will see that the total excess deaths in 2020 alone for the USA was 472,000. Also, can you point me in the direction from which you got the idea that total excess deaths were 58,000?

@Jose Legitimate questions! And yes...since they invented covid - all other diseases and sicknesses ceased to exist. Here an example how far the perfidious goes: My grandfater (was 91years old), had all kind of sufferings in the last decade...and was 2-3 times in a very life threatening situation including coma...several heart attacks, a brainstroke ...the list goes on...what could also described as "relative normal" for this age. He got vaccined, after 1 week we had to put him into ICU, and after 2 nights he died. Official cause - COVID! (though he was always tested NEGATIVE until the day he got into ICU). More than that, as there is the rule that all VACCINATED-persons that die within the first 2 weeks after getting the jab, have to be counted as unvaccinated - he is now, an UNVACCINATED covid-victim (this rule is being justified with the statement that it takes at least 2 weeks after the shot until the "ingredients" get active). Imagine that on a national - even global scale!!! NOW go and ask questions, to "your" authorities, families, friends, doctors etc. - PLEASE !

My question is this, It says in this article that 670,000 people in the U.S. have died from Covid. If you do a bit a searching you will find that there was a 2% increase in the total deaths in the U.S. from 2019 to 2020 or 58,000. Are you telling me that deaths from all other causes do not exist any longer?? All deaths now are Covid. Just wondering.

25 days ago
The comments are the responsibility of each author who freely expresses his opinion and not that of Newsroom Panama.