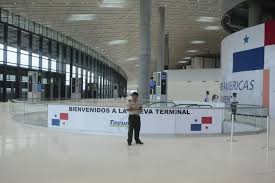 The -$800 million  Terminal 2 at Panama’s  Tocumen International airport will be formally inaugurated on Monday, April  29.

The project built by   Odebrecht, which will raise the airport’s take its mobilization capacity to 25 million passengers per year, in line with the country's strategy to consolidate itself as a regional hub.

Terminal 2 (began construction "in March 2013 with a view to improving infrastructure and accompanying the economic and logistic growth of Panama", says the administration’s website.

The is began partial operation on Friday with the opening of five doors, The remaining 15 will be enabled in the coming months.

The   116,000 square meters terminal was designed by British architect Norman Foster,  and will be  "progressing, calibrating all systems" in a process that "will lead until the middle of the year, "said the management.

Ramírez emphasized that the immediate benefit of putting the new terminal into operation is the "redistribution of capacity" of the airport, "which has been committed to the existing terminal", which was made to serve 12 million passengers per year but is receiving about 16 million.

The  Odebrecht bribery scandal at the end of 2016 caused concern about the completion time of the works in the administration of Tocumen, then under Joseph Fidanque III, and in Copa Airlines, the Panamanian flag line and prime user of the terminal.

In August 2016, when the T2 expansion project was 56% complete, it was officially reported that it was expected to start operations in the first half of 2018.

The T2 functioned provisionally in January to receive flights with thousands of   World Youth Day (WYD) participants, including Pope Francis, while in December 2018 it was opened for the flight that brought Chinese leader  Xi Jinping to Panama.

will the moving sidewalks move??