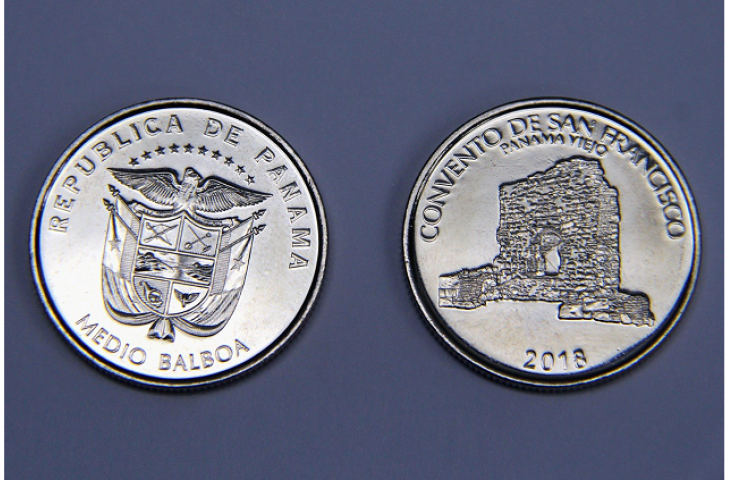 A newly minted 50 cent coin (half a Balboa) will be in circulation in Panama on Wednesday, August 15 to mark the 499th anniversary of the founding of Panama City.

One side of the coin shows the Convent of San José that is inside Panama La Vieja. Some three million coins will be distributed by The National Bank reports the Ministry of Economy and Finance (MEF).

The MEF said that the coin forms part of the collection of coins for the period 2010-2019.

The coin carries an image of the Convent on one side and on the back is the national shield with all current elements such as the Harpy Eagle and 10 stars representing each province.

The funds that arise from the collectible coinage, are donated by law through the National Treasury to the Panama Viejo Board for its preservation, maintenance and to enhance the site as a historical heritage.

La Vieja, founded on August 15, 1519, is the first Hispanic city on the Pacific coast of the American continent, the axis of one of the most important trade routes of the time and starting point of the expeditions that allowed the colonization of Central and South America.

In 1976, the ruins of Panama La Vieja acquired the status of Historical Monumental Complex through Law 91, and in July 2003, UNESCO inscribed Panama Viejo on the World Heritage List, as an extension of the Historic District of Panama.