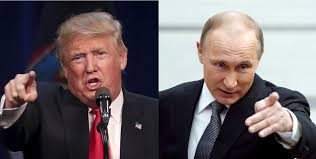 By Jonathan Power
Until Trump came on the scene as America’s number one, Putin took the prize for autocracy. No longer. Who uses his power to stir up violent, anti-democratic, movements? Who incites racism? Who cares barely a fig for poor ill people? Who cossets the rich?  Who threatens the world’s existence most- the one who spends more on increasing armaments than the other has altogether? Who imposes on the Supreme Court new members who will rule against human and civil rights, Medicare for the poor and vulnerable? Who single-mindedly rolls back previous progress on combatting climate change? Who uses his untrammeled power as commander in chief to order 60,000 military personnel to be stationed in the Middle East and supplies armaments to Saudi Arabia so that it can attempt to annihilate fighters ranged against it in Yemen, together with tens of thousands women and children?  Who threatened to imprison Hillary Clinton, his political opponent at the last election? Who threatens now not to recognize the result of the coming election?

Apart from the arms build-up. Trump does all this without Congressional authorization.

Now, what about Putin? He too has many autocratic tendencies and powers. He just won a referendum on a new constitution that allows him to stay in power for 16 years more, as long as he wins the vote in successive elections. Who controls directly or indirectly most of the media? Most of it, but not all, as Westerners claim- there being two newspapers, a couple of TV stations, a financial and business magazine, and a radio station that operate nationally with a great deal of freedom. Then there are a number of locally-based, more open-minded, radio and TV channels spread around the country. The internet and foreign broadcasts are uncensored. Who allows demonstrations but only if they are limited in size, (apart from the large one now the last three months taking place in Khabarovsk)? Who rules over a country where opposition figures and journalists too are sometimes beaten, imprisoned or murdered?

But, on the positive side, who heads a government that provides health services and pensions for all? Who, at present, has troops fighting abroad only in one country, Syria? Who keeps his country’s membership of the World Health Organization and increases its donation to it? Who takes climate change seriously? Who keeps capital punishment abolished? Who preaches against racial division? Who, although divorced, exhibits moral rectitude in his personal life, including paying his taxes? Who still has from his people, in a poll conducted by the respected, independent Levada agency, 60% support, compared with Trump’s 46%, according to Gallup.

Professor Stephen Walt of Harvard University argues in a recent article in Foreign Policy magazine that there are 10 ways in which Trump is on the road to becoming a dictator. He confesses that for all his doubts about the man, in 2016 he believed that Trump would be constrained. “I didn’t expect him to grow into the responsibilities of office, but I believed that the system of checks and balances built into our constitutional order would rein him in sufficiently to protect the core features of US democracy. How wrong I was”.

Walt continues, “He has replaced anyone with integrity and a genuine commitment to their oath to defend the constitution with lackeys, opportunists, and power-hungry ideologues.”

Walt believes that Trump has every incentive to stay in power to keep himself out of jail and to avoid losing his wealth.

The media in America, for all its many mistakes and, for most of it, its ignorance and oft misrepresentation of foreign affairs, is much freer than Russia’s, but Trump has tried to brainwash many people into believing that the mainstream media indulges in “fake news”. He has signed an executive order that could eventually allow his government to oversee political free speech on the internet. He has increased the prosecutions that involve journalists’ use of classified information, searched their electronic devices, and monitored reporters’ movements. Indirectly he has encouraged arrests and attacks on journalists.

He has tried to persuade the Ukrainian president to dig up dirt on Joe Biden, threatening him with a cut-off of US aid. He has removed independent inspector generals whose job is to be a watchdog over government wrong-doings in the departments of state, defense, health, human services, transportation, and the intelligence services.

He has run a financially corrupt presidency. According to a study made by the non-partisan Brookings Institution, there have been reports that 27 clients of Trump-connected lobbyists have received over $10 US billion in government coronavirus spending.

Terrorism
Although right-wing terrorist groups and white supremacists are responsible for far more deaths than left-wing protestors, Trump has repeatedly signaled his sympathy for the former and has heavily criticized the latter.

At the same time, he has given clemency to his own criminal associates, such as the convicted felon, Roger Stone, and ordered the Justice Department to drop charges against former National Security Advisor, Michael Flynn, accused of making false statements to the FBI.

He has tried to defund or disrupt the Postal Service, making it less capable of handling the surge of mail-in ballots, which tend to favor Democrats.

He has signaled to Republican states that he is behind their efforts to disenfranchise black voters. He has made irresponsible claims about the behavior of Muslims, Mexican “rapists” and has suggested that angry mobs of non-white people are heading to the suburbs to seize the homes of white people.

Apart from all the above, it’s his country that is incubating the coronavirus more than any other single nation, with the exception of India and Brazil, thanks to his irresponsible policies.

I’m not a pollster but I think my guess that a vast majority of the world wants Trump to be defeated on November 3rd is the right one. He is widely regarded as a malevolent autocrat. I’ve given you the measure of whether he is a worse or better autocrat than Putin. That, dear reader, is up to you to decide.

claire...simple typo. I know the difference. Say...you just recently showed up here. Are you, by chance, a friend of jbbrown?

Yeah, casual observer...you are the student. "Your the teacher..." I know that "you're" is the contraction for "you are" and "your" is the possessive. Shall I teach you the English language?

Any list of autocrats that doesn't have Xi Jinping in the top spot, let alone not even mentioned is suspect off the start. If you want to examine his legacy you can start with these. Subjegation of Hong Kong Internment Camps for Uyghurs in Xinjiang province Occupation of Tibet Supressing the culture of the natives of Inner Monglia Constant border incursions against India Building artificial islands in the South China Sea to push bogus border disputes with Indonesia, Malasyia, Philipines. Constant threats of invasion of Taiwan

Watched the video butler, and holy shit, I understood it!!!!! A gold star for me I guess. Why don't you just post the link and drop the pompous attitude. Oh yeah, I forgot. Your the teacher and we are all lowly students.

Something went wrong with this stupid system. It was addressed to Claire. Sorry !!!

Hola Claing lady...re. I plan on loving you till the end of the world...at least until Putin blows you up. Do you seriously believe he means what he says ? Or maybe he only wants to see his slave re=elected and then change his mind ? Dream on, young lady...but hopefully not about me. Not interested in a relationship with a future corpse !!!

Based on the intellectual vapidity of this article as well as the laudatory comments, I doubt most folks here can understand the import of this, but here is an analysis of something even more important to the world than keeping the Biden crime family and the deep state mafia out of the Whitehouse. https://youtu.be/enmHW4gCkAY

Spot on Ajd. To you Claire...good idea, leave this site and refrain from posting here. El Duce is a 3rd rate con man at best. Doesn't give 2 shits about anybody but himself and his "family". He has 9 serious charges against him when he is out of power and is scared shitless. Hope they can find an orange jump suit that fits.

Satan's biggest accomplishment.....convincing the world he does not exist. I am no bible-thumping christian, but the analogy truly fits. Trump does all his evil right out in the open and idiots like snake pliskin merrily dance behind him as he leads america over a cliff. Everything in JP's article is true. The orange dotard's entire presidency has been a classic study in despot building. He is the proverbial bull in a china shop. His current reelection campaign exposes clearly that he has always lacked a plan....for anything. He is a "one trick pony"!! Shout and scream and blame and whine....only to mostly uneducated poor white people. The others who have some currency follow him because he is making them more money. But the common man, and especially people of colour, have no value other than whether he can somehow convince them to vote for him....totally against their own interests. Humpty is the consumate conman.....and not even that good at it. His success is due solely to what I call "american exceptionalism"! Exceptionally ignorant, exceptionally racist and exceptionally insecure and fearful. Humpty has fed of off that his entire presidency. And what drives him, like all despots, is fear of not being in power. Because as soon as he is not, the rest of his life is in court and/or prison.....he and his entire criminal enterprise he calls his "family". So JP, you are right on the money, the orange dotard is a wannabe tinpot dictator and america would do well to toss him to the trash heap. But this is america though.....exceptional!!!!

Newsroom Panama, the communist rag. And I agree that Jonathan Powers is stupid and clueless. Skip this communist rag and get unbiased news about Panama--and the rest of the world. panatimes.com Just this morning: "Russia ready to freeze warheads total to extend nuclear pact with U.S. by a year." https://panatimes.com/russia-ready-to-freeze-warheads-total-to-extend-nuclear-pact-with-u-s-by-a-year --Still another accomplishment toward peace, thanks to President Trump. Another article: "Panama lifts Sundays from quarantine starting October 25." https://panatimes.com/panama-lifts-sundays-from-quarantine-starting-october-25 This will be old "news" by the time Newsroom Panama reports it.

I'll try to stop laughing long enough to say O - M - G... The world really is as insane as it appears to be.

Bias because he calls out El Duce for being a wanna be fascist?

There is only one word to sum up Jonathan Powers articles and that is "stupid". This guy knows nothing of what he is talking about and NP is stupid enough to publish his bias nonsense.