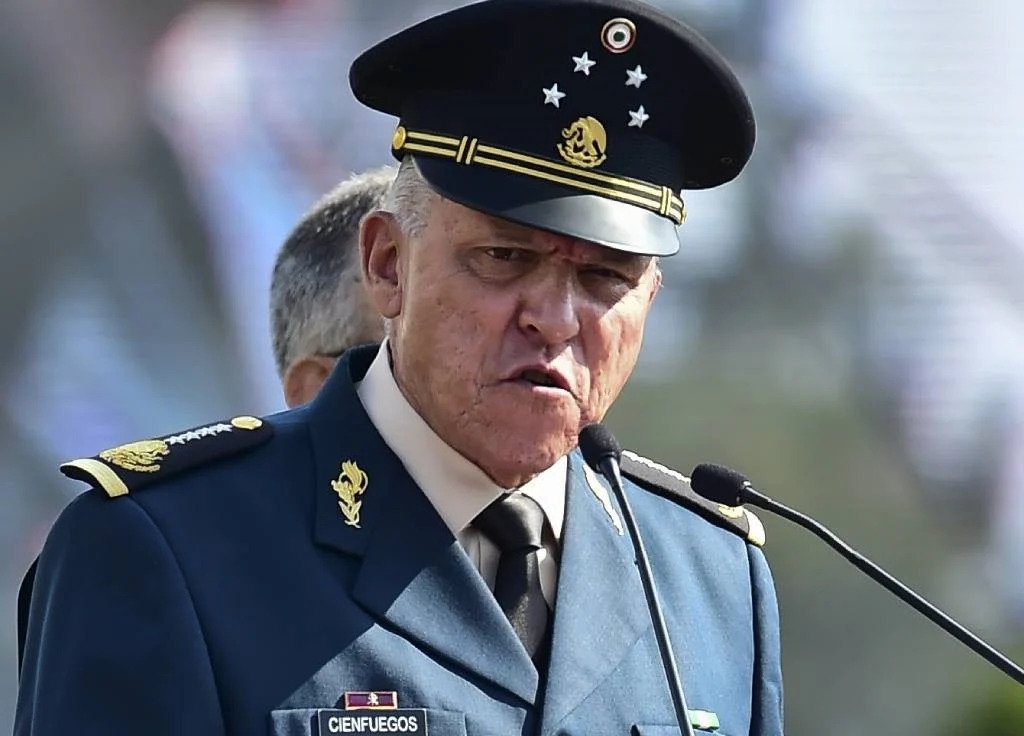 Last Thursday, October 15, the former secretary of Defense and former general of the Mexican army, Salvador Cienfuegos, was detained at Los Angeles, California airport. The DEA accuses him of: Money laundering, trafficking in heroin, cocaine, methamphetamine and marijuana.

Cienfuegos was, between 2012 and 2018, possibly the most powerful man in Mexico. He was the commander of the second-largest army in Latin America (after Brazil), and commanded 267,500 men and women writes  Rodrigo Noriega in La Prensa

The blow was particularly hard for the Mexican army and for the fight against drug trafficking, since 2006, Mexico engaged in the brutal and savage militarization of the war on drugs, resulting in homicides, violent crimes, and atrocities. on all sdes

The origin of the fall of Cienfuegos was the usual one in these conflicts. The DEA had many suspicions that very sensitive information reached the traffickers and that some drug cartels had military protection.

The Godfather
According to Mexican media, during a DEA telephone interception drug traffickers, presumed “that the Godfather” offered them protection for their activities. In the middle of the conversation, one of the traffickers said that The Godfather was speaking on television at the time.

The DEA checked and after years of investigations, the Godfather became the “Prisoner”. His case is handled by the Eastern New York Federal Prosecutor's Office, the same one that is carrying out the investigation of the sons of former president Martinelli.  Ricardo Alberto and Luis Enrique Martinelli Linares, for their connection to the Odebrecht case.

The fall of Cienfuegos accompanies another major US arrest of a former member of the Mexican cabinet in charge of fighting drug trafficking, Genaro García Luna, who was arrested in Texas earlier this year for receiving bribes from the Sinaloa cartel.

García Luna was the director of the Federal Investigations Agency during the Vicente Fox government, and later was Secretary of Public Security in the Felipe Calderón government, the one who militarized the fight against drug trafficking. The arrests of Cienfuegos and García Luna means that the top officials in charge of the fight against trafficking in Mexico, during the last two decades, worked for the cartels.

In those years, the US  supported the dismantling of civilian criminal investigation bodies in the region. For example, the Mexican Federal Investigation Agency and the Judicial Technical Police of Panama and the Dominican Republic were eliminated.

In the midst of the pandemic, in Panama, it has been proposed that the budget of the Ministry of Security be doubled by 2021. The absurd and inexplicable measure can only be related to the successive visits of advisers of the US  security and intelligence establishment. The strategy is typical of simplistic geopolitical thinking: the Colombian Police and Armed Forces are overrun, so the militarization of the fight against drug trafficking in Mexico, Central America and the Caribbean.

This problem long ago got out of the hands of the same old men. The way to defeat the drug trafficker is with institutions, quality public services, and an inclusive economy. If the hundreds of millions of dollars that go to the Ministry of Security, went to the Ministry of Education, every Panamanian student could have a tablet or laptop with internet access. If this money went to the Ministry of Agricultural Development, it could generate hundreds of thousands of agricultural jobs and lift the country's economy. If these funds were dedicated to tourism, the promotion of microenterprises, or the support of entrepreneurs, it would generate new investments that would serve to take away space from gangs and money laundering. The government decided to opt for the unsuccessful path that Latin America has already traveled.

The Big Lie
In 1993, former DEA agent Michael Levine published a testimonial book The Big White Lie (titled in Spanish La Guerra Falsa), in which he narrates that when he was head of the DEA in Bolivia, the president of that time Lidia Gueiler Tejada, offered all her support for an operation against drug trafficking in her country, which would have dismantled the productive capacity of the cocaine industry.

When the action was about to begin, Washington changed sides, since communism had to be persecuted, and Gueiler's ideas contradicted those aims. The presidential election that was to replace her was conflictive and the military initiated a coup. The fight against drug trafficking in Bolivia is over, and 41 years later that country is still in instability. Cocaine production moved to Colombia and the rest is known history.

The failed war against drugs marked the last quarter of the twentieth century in Latin America and has been on the same path for two decades of the twenty-first century.

It is time to recognize the mistake and change the strategy that is doomed to fail. The time has come to shut down Cienfuegos and to rescue the future of our democracies.

== Personal behavior cannot be legislated == The war on drugs is an expensive failure. On the other hand, laws that are enforced influence behavior. In Colorado, cannabis use is up significantly since commercial legalization and the marketing that entails.

The best thing about legalization is it removes the corruption, brings in tax revenue and forces business to operate on 30% margins instead of 3000%. Anybody with 3000% margins can corrupt anything. When you are required to run a real business on thing margins, it is not that easy.

Where there is demand there will be product. Personal behavior cannot be legislated.

The huge amounts of money that have corrupted all the named officials, and all of the lower ranking local gangs and dealers, are the result of nothing but having made these drugs illegal. Historically, herbal and medicinal plants have been cultivated in family backyard gardens and shared amicably with neighbors for health and pleasure. These traditions were capitalized by making them illegal and putting them in position to generate fortunes for the corrupt police, politicians, and pharmaceutical companies, while the citizenry became criminalized for mere possession of what had been given by Nature and available since the beginning of time. As a society we allow numerous forms of dangerous behavior like rodeo, skydiving, and rock climbing, with very little restriction, only because there is no profit in restriction. The real criminal here is capitalization with the intent to create profits for the corrupt. The laws against use, cultivation, and sharing, of plants must be removed, the huge profits generated from illegality must be eliminated, and The People must be allowed access to the natural world without criminalization.