The magical recovery of a terminally ill “victim” 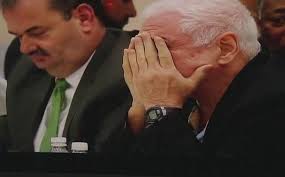 Panama already knows that Ricardo Martinelli has more than one face. One of them is that of a terminally ill patient who shows up during their stays in prisons. Another is the one of forgiving life, which he exhibits every time he obtains any benefit for himself or knows that he is untouchable or protected by a force that only he knows. And that has been the quarrelsome face that has given us - with greater intensity if possible - since the Trial Court found him not guilty of charges of political espionage and peculation. He who once pleaded for  the clemency of  judges alleging ailments such as coronary heart disease, high blood pressure, sleep apnea, glaucoma, depression and even a non-existent colon cancer, now leaves the court making threats to the Attorney General of the Nation, to prosecutors and a former president of the Republic. The latter was warned that he will look for him in the restaurant he presumes he frequents, to put him "a fist." And he even called on SPI agents guarding one and the other to participate in the hypothetical fray.

This announcement was even celebrated by followers and lawyers, who are supposed to be servants of justice. As anarchy reigns in this country, all you need to do is open bets. And all to the rhythm of Mariachi – LA PRENSA. August 11.