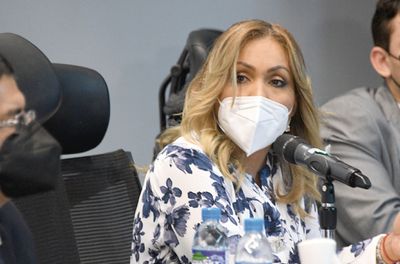 Deputy Yanibel Ábrego has 28 employees on a permanent payroll, whose salaries total $ 51,000 per month

A driver, who at the same time is mayor; who receives his two salaries, even if he is on leave from one of his jobs, or administrative assistants who share directives with Deputy Yanibel Ábrego and who attend to the business of the official and her relatives, are just some of the findings in the personnel payroll permanent office of this deputy. Ábrego, with 28 public servants at her service - whose salaries add up to a whopping $51,000 a month - has apparently seen us look stupid, since part of his staff, in addition to what has already been described, works on her political and electoral campaigns, instead of going about the business for which they are paid thousands of dollars a month. There are even people who maintain that they have received money and food in exchange for joining the ranks of the Ábrego political group. Is it the only one that has your staff involved in your companies and campaign? It is very possible that it is not the only one. This is how our taxes are spent: it is the petty cash of the game – LA PRENSA, Sep. 21.

The real question is why this grifter is still doing her grift?! When #PartidoRobarDinero is in power, all corruption is legal. So this self-dealing toadie will just keep on stealing National funds, keep living the Beverly Hills lifestyle, and keep juking the Panamanian people. Quite sad indeed..

Panama: Eventual Increase in Political Monetary Favors... $100's Thousands / Month. Tax payer's money is not the only cookie jar available. The Panama Canals are revenue generating vast fortunes a month, the... separate entity. Once this wealth is distributed to clamp down on dissatisfied political dissidents... the money underground operation begins, knowing there are ranks among the... millionaire's club. Money represents status among the elites and subservient to well define the next... promotion for added wealth... not 10 cent raises per hour, like the Janitors for their offices. Surveillance cameras to keep tab on trouble making Panamanians is always a good investment with profitable purchases of hiked up government equipment. Questionable increases in salaries at the expense of the Panama National Debt has never been a priority as long as the canal expansion is there to save the day and reputation of the political robber elites! Panama president Cortizo still counts his Executive pay and enjoys wealth with his... China counterpart for sales of his cattle beef and manure business operation. Cortizo knows his campaign for... UNITY... only means more extraordinary profits as the mafia Molirena party takes more and more control of Panama's economy despite repeated warnings of an economic collapse with greater numbers of violent increase in the murder rate in the public streets with a well established connected gang - political - mafia organization! Panama president Cortizo is hardly the man who shares in the plight with any sympathy for the Panamanians blinded by his own lust for counting his Executive pay... always on his mind! Treachery... betrayal... death... and denial is all the Panama administration of Cortizo has to offer! Unconstitutional advisors... I can do whatever I want... the [Cortizo Untouchables]!

25 days ago
The comments are the responsibility of each author who freely expresses his opinion and not that of Newsroom Panama.