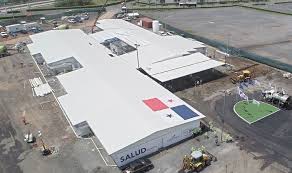 Did the Comptroller General of the Republic do its job of overseeing the modular hospital? This institution has among its official's specialists, auditors, engineers, forensics ... a complete team of professionals who can inspect the works paid by Panamanians who pay taxes. Professionals in the field and investigations of this medium found irregularities about that tender that have not been clarified either by the contractor or by the Minister of Public Works, Rafael Sabonge. And now the Comptroller's Office joins that list, which will endorse the contract, despite the fact that it also found upward differences with market prices. It seems that the dance of the millions continues without giving quarter, despite the damage that the pandemic has done to the economy. The decision to endorse has been made, despite the fact that the origin of the hospital modules is still unknown, leaving the problem in the hands of a government agency. Another case that will end up archived and forgotten. – LA PRENSA, Sep. 5

Panama | Public Projects Unclarified by State Comptroller....Tax Payer's Expense. Panama National Assembly behind the scheme with one of their own elected official. Building projects many times have set backs with financial burdens. Building owners will usually walk away or burn the project and collect on insurance. Building owners will usually take the matter to court and recover their expenses. Panama National Assembly sees an endorsement profit, however small against...tax payers. Panama citizen tax payers have an obligation to guard their financial communities! Therefore, it is their fundamental rights to not only hold their government accountable... but to cut their losses... burn the project through the midnight mobs of guerilla warfare tactics. Burn the institutions who callously throw objectors into filthy, murderous...[prison gang cages]. Panama is not free and has no say as corruption continues in dire circumstances with... ELITESTS...knowingly taking more power and money from the state funds in public view!!! Panama has reached the...PINNACLE OF ABJECT CORRUPTION!!!