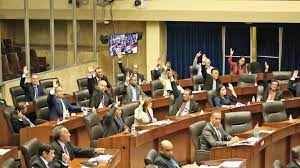 The National Assembly has been consistent with its terrible image and its little matters. This year, despite the fact that we experienced the worst economic crisis in the last three decades, the deputies have had no problem increasing their budget. From less than $150 million in January of this year, its budget has ballooned to more than $220 million as of last October.

Is it really so much spending in the Assembly? If we thought the worst, we would surely fall short, since the deputies have proven to be the flesh and blood expression of greed. Undoubtedly, they are preparing to get as much money as they can from the State and then unleash the usual clientelist politics, with a view to the 2024 elections. From now on, they raid the National Treasury to ingratiate themselves with an electorate that acts as a useful fool and is dependent on political criminals who deceive without scruples. Tens of millions of dollars spent, for what? To re-elect the most decadent, criminal, and incapable that has come out of politics? I wish we Panamanians would stop behaving like Phoenicians and be the citizens we say we are. Only then will we stop being treated like scum. – LA PRENSA, Nov.22.