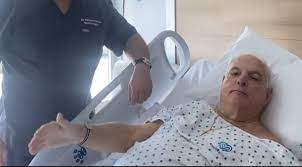 Another photo-op for Martinelli

YESTERDAY in the trial of the punctures, there were no surprises, but, yes, a lot of cheek. Neither former President Ricardo Martinelli nor his lawyer Alma Cortés appeared at the hearing and, instead, sent excuses: the first, convalescence in a hospital after spinal surgery, and the second, an urgent appointment at the dentist for a cavity. And there were no surprises because we have been watching for weeks how the former president left the dance and the party to show on social networks alleged illnesses that would lead him to a hospital bed instead of to the dock. It was a stage prepared so that, precisely, there would be no surprises when the curtain opened. The court has done well to appoint a public defender for him if he does not appear within two weeks. But the former president's spokesman replied that Martinelli will be in recovery for six months and after that he will go to therapy. The excuses of all of them reveal with absolute clarity the deep contempt they feel and openly manifest for justice and the victims of the punctures. Here is one of the favorite dodges of the former president: is it that these evasions do not violate the due process of the victims? LA PRENSA, Jun.23