OPINION: A friend of putrefaction must resign 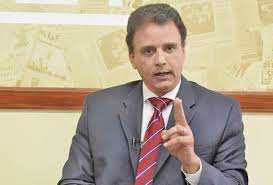 The opera buffa that Gerardo Solís has staged in the Office of the Comptroller General of the Republic is a national shame. His script, in addition to being mediocre, stopped being funny two years ago, just the time it took us Panamanians to realize that behind his bad performance it has only served to cover up the grotesque squandering of the national treasury.

Far from controlling spending and preventing the insulting waste of public money, he sponsors it. While the actors in this sad comedy display the crudest patronage, the play's scriptwriter has ended up discrediting the institution responsible for preventing theft.

The Comptroller, lacking any credibility, far from publicly denouncing the corruption of these officials, has served as a cover in many cases and has justified what is clearly unacceptable. Few will be able to forget that time in which he assured the country –and before his bosses, the deputies– that there was no such thing; that the corruption thing was a baseless rumor.

Since then, each scene has been worse than the last. And what for him was a rumor, became facts when the very leadership of the ruling party and prominent militants preferred to resign from the collective and denounced that they could no longer bear to see the corruption that reigns in that party, where the only incentive for some one of its most conspicuous members is corruption.

And this is how those who govern us at the point of corruption, those who deprive the country of our resources and indebt our children and grandchildren, count on the Comptroller's Office among their unconditional allies.

Not satisfied with his unfortunate actions, the Comptroller, in his last appearance, intends to take us away from reality, from the forcefulness of the numbers, those that account for thousands of new appointments born of the crudest clientelism, trying to convince the country that the state payroll has not grown, convinced that by gesticulating and smiling fantasy is capable of deceiving idiots.

The manipulation of the figures, and the accomplice and opaque action, only deserve one answer: resign from the position, Mr. Comptroller. The country does not deserve someone who, far from being a guarantor of the correct management of public finances, has become an accomplice of lies and an endearing friend of the putrefaction that corrodes the foundations of our Nation. - LA PRENSA, Aug. 3.