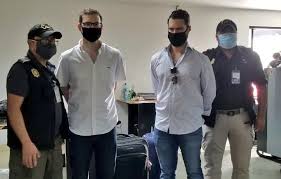 The new criminal charges that prosecutors have made in the United States against two of the sons of former President Ricardo Martinelli - who are in Guatemala waiting for the extradition process to continue to the United States - reveal the seriousness of their legal situation in that country, where they would face penalties that can add up to 50 years in prison. And everything is related to the investigation, which for years has been the Odebrecht case. The contrasts between American justice and ours are embarrassing. While in the United States it advances with firm steps –as in other Latin American countries–, in Panama everything indicates that the theft of state funds will go unpunished since in the Supreme Court of Justice a conspiracy is woven to make the case suffer the luck of all high-profile processes: impunity. Here, the investigation has irrefutable recordings, documents, confessions, and evidence against the accused –evidence as solid as in the United States–, but the fate of the cases in both countries will be very different. And that is known by the parents of the extraditable, who desperately want them to return to the country, because here the most petulant corruption reigns, whose inseparable companion is, precisely, impunity.- LA PRENSA, Jul 29

Panama | U.S.A. Presidential Pardons...Chess Game. U.S.A. presidential pardons are points in a match. Lose a game and win a game/point down the road. Win some points and the president appeases his team. Both parties do this!!! Panama corrupt presidents...flees with $$$. $$$ buy battery of lawyers and wins...honor and lawsuits. Honor and lawsuits builds his underground connections for $$$. $$$ continues down the road until there is a coup or death of some sort...and the underground continues to branch down the road. Corruption is then justified through a powerful dictatorship with intentions of population control through famine. Missing? Diseases and so the partnership with an alley to ward off the United States. U.S.A. president agendas are usually...capital enrichments on an international level with political favors and kickbacks through foundation donors...ANY AND ALL FAVORS GO!!! Famines of a nation... VENEZUELA PRESIDENT MADURO: HUNGER IS THERE BUSINESS. Mass exodus and the financial rape of another nation...GERMANY. GERMANY...buys oil from RUSSIA. GERMANY...buys surveillance equipment from CHINA. CHINA...SILK ROAD PROJECT...SPEARHEADS TO GERMANY. GERMANY...Leads Europe as the wealthiest nation. U.S.A....Pulls troops out of GERMANY. U.S.A. democrats appease CHINA. CHINA...WUHAN VIRUS GLOBAL EPIDEMIC. CHINA...Spreads disinformation. U.S.A. / CIA INFORMATION...MORE WOMEN'S AND BLACK RIGHTS! U.S.A. more jobs...(steel industry, intellectual property thefts, Pentagon hacks, etc?). U.S.A. knows but the president isn't feeling...well?. Republicans and Democrats election and Democrats and Republican elections... Game of...RUSSIAN ROULETTE... NO FORESIGHT INTO THE GLOBAL UNDERGROUND. U.S.A. news media...ALL CONSPIRACY THEORIES...AND LACK OF STRATEGY!!! Panama? Israel Pegasus spy equipment to invade citizen privacy with a court system blessings! ---IMPUNITY & IMPUNITY...$$$. LAWLESSNESS AMONG THE LATIN COMMUNITY. CHINA, RUSSIA AND IRAN...U.S.A. WEAKENEDN BY CORONAVIRUS... ATTACK ISRAEL WITH CORONAVIRUS WITH A SPECIFIC DNA FOR ISRAEL! ATTACK ISRAEL WITH MISSILES FROM RUSSIA COMPLIMENTS FROM... Former Secretary of the United States...HILLARY RODHAM CLINTON. U.S.A REPORTING? What reporting...Panama? Some other time!

Justice in the USA is thwarted by presidential pardons of cronies who swore under oath they were guilty (Flynn), who were convicted of 7 felonies (Stone), and who still show no remorse (Blagijevich). Bush 41 also pardoned colleagues in the Reagan administration.

Panama | Former President Martinelli = > ~~~(((!$$$!)))~~~ POPULATION DESTROYER...STATE! A MAN (Martinelli)...Starts out taking welfare PAN from his own people for purposes of a devious plot to spy with a $14 million...ISRAELI PEGASUS..TO SPY AND CONTRIVE BLACKMAIL ON POLITICAL OPPONENTS AND ANY ONE WHO IS A THREAT TO HIM and connects with selected pacts of complicit greedy hush money collaborators is corrupt at a level of a sick degenerate. ALL associations with Martinelli are at his level of total degeneration who admits and officially makes public to compromise his mental state for defending what he calls his...HONOR??? Martinelli is first and foremost a...DEGENERATE WHO SIDE WITH THE MOST CORRUPT OF CRIMINALS EVEN THAT OF A CHILD MOLESTER...WHO CARE LESS ABOUT CHILDREN HOSPITALS AND OTHER QUALITY OF LIFE CASH DISPERSMENTS FOR THE MASSES!!! Panama complicit pact with the current president support of Martinelli demanding proof is blind to his own family backyard rape of his own children and wife. Martinelli is enough to marvel at the degradation of a Panama with previous presidents gorging on the Brazil's Odebrecht hams while their National Assembly deputies steal the children and children's children future with absolute denial and their own rewards. The previous presidents implemented the HAMS FOR THE PANAMA POPULAS FOR THEIR OWN AMBITIOUS GOALS OF GENERATING FUTURE WEALTH AND NOW...MARTINELLI ~~~ (((!!!)))~~~. Panama president Cortizo made himself a...LIAR...when he stated he would cleanup corruption and now... support the sick demented degenerate...Martinelli. Panama president Cortizo cares less literally in every sense of the word about...Panama! Cortizo sides with a sick degenerate than side with the poor of Panama! The TRUTH IS THE TRUTH and Panama denial of the TRUTH IS ANOTHER FUTURE VENEZUELA!!! Panama president.