Martinelli statement "the pinnacle of cynicism" 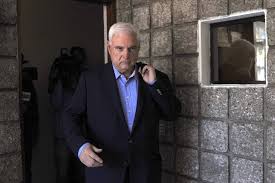 The statement released on Friday signed by former President Ricardo Martinelli's spokesman is the pinnacle of cynicism. “Ex-president Martinelli understands that obtaining the most favorable sentence was the north of the defense of his children […]. In his conversations with them, he told them that his lawyers should do whatever is necessary to that end. Every person who has children will understand perfectly that for his children a father is willing to carry the load that is necessary…”. The defense of the Martinelli brothers held the former president responsible for the criminal conduct of his clients. So the suggestion was that the lawyers lie to the judge to get the most favorable sentence, holding him responsible for everything? Lying to a judge is not something that is taken lightly in the United States, so it is unlikely that the lawyers would consider such nonsense. Furthermore, there is nothing noble about suggesting doing what is necessary if it involves lying. But in reality what the statement was looking for was something else: to make us believe that the lawyers lied about the accusations that they poured out on him in court. It takes a crooked mind to take advantage of the worst moment in the lives of his children, to save his skin. – THE PRESS, May 22.