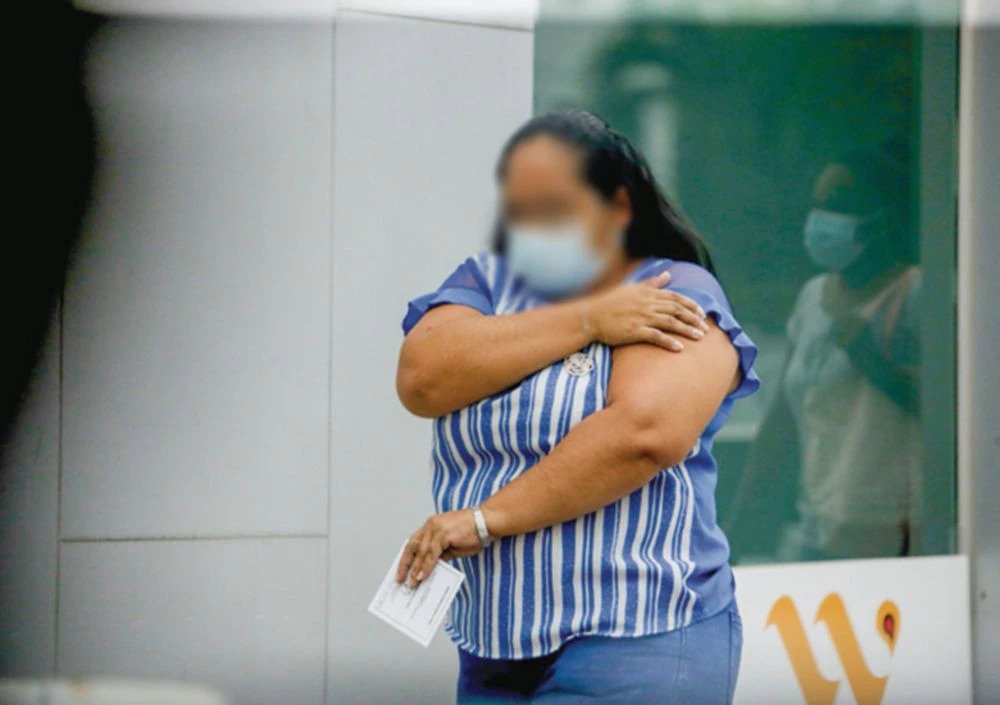 Health authorities must carry out a thorough investigation in the case of an alleged clandestine vaccination that this media confirmed yesterday. It is a serious complaint, in which it would be necessary to determine if there was a fraud or if the people who were vaccinated received immunization doses from third parties that are under the strict custody of the Ministry of Health and the Social Security Fund. If the latter is the case, it is necessary to clarify how they reached private hands, if they were sold. And if this operation was never approved by the competent authority, then the weight of the law should fall on all those involved, since these vaccines would have been paid for with money from the State. And the punishment needs to be exemplary, both as if these were false vaccines and if they were true, since, in any case, it would be gambling with the health of the people who received these doses, clandestinely. But also, if it was a theft of vaccines, there is no doubt that their custodians will have to be investigated, if there were orders to deliver them and, in that case, who issued them. Health authorities risk their reputations on this investigation. LA PRENSA, Jun. 8

If you have the sense that God gave a goat you'll NOT listen to a FU#%'N thing from "LIE'N" BRIAN & his side kick. Last time I checked "CRY'N" BRIAN'S sources were BITCHUTE.COM now I recognize another FAR RIGHT WHITE SUPREMACISTS SUPPORTING site with all the bells and whistles of THE CONSPIRACY RABBIT HOLE WORLD 😂 "The Epoch Times opposes the Chinese Communist Party, promotes far-right politicians in Europe, and has backed President Donald Trump in the U.S.; a 2019 report by NBC News showed it to be the second-largest funder of pro-Trump Facebook advertising after the Trump campaign. The Epoch Media Group's news sites and YouTube channels have spread conspiracy theories such as QAnon and anti-vaccine misinformation. In 2020, the New York Times called it a "global-scale misinformation machine". Don't take advice from FOOLS, because as Alexander Hamilton WARNED, "THOSE who stand for NOTHING, FALL for EVERYTHING" Semper Fidelis🇺🇸🙏🏻

And the longer idiots like Brian and myself “rail against vaccinations” the more variants will be created by those vaccinated— Viruses gonna virus. When will you idiots accept the science that firstly you never vaccinate at the height of a pandemic bc you encourage the virus to find a way around antibody activity and more-so in the forced antibody creation by injecting a gene therapy designed to manufacture the spike protein in the body to elicit a strong antibody response. It’s like an invitation to the virus to come on in and circumvent efforts to destroy it. And “ improper needle use” causing Covid deaths — you gotta be kidding, Captain! You’re turning out to be as much of a joke as poor little Wenny and how she believes she’s “protected” because she got the jab. You two are a marriage made in heaven, both as stupid as a bag of hammers. Yet, you still haven’t answered how many serious adverse events or deaths from the vaccine are enough; instead you deflect with your tiring repetition of “long haul”. At this point who gives a damn when we’re dealing with a biological weapon known as SARS-CoV-2 and the biological weapon referred incorrectly as a “vaccine” to finish off the job. Man was created in the image of “you know who” and was perfect in its capability to protect itself — vaccines messed up that perfect arrangement and no amount of your ridiculous comments to the contrary are going to mean dick shit. In the answer given by Dr Mikovits to the question :” are any vaccines good” — the succinctness of her “NO” response gives credence to the fact that God did not make a mistake but it appears Man is more than capable of screwing it up and you’re more than capable of defending the indefensible.

Hogan to answer your question, I know of only a very few deaths globally and even those are not definitely linked to vaccine (could be improper needle use for example ). When considered against the now hundreds of millions safely injected the balance is widely in favour of vaccinations as opposed to Covid outcomes which can range from death to long Covid which in the case of the latter now extends to more than a million cases in U.K. alone . The new Delta variant is especially worrisome as it is 100% more transmissible than the original strain and is causing an issue for all non vaccinated communities and hence the need to step up the vaccination drive even in the U.K. and USA . The longer idiots like Hogan and Brian rail against vaccinations the more Variants can emerge to put at risk the wider community.

I said the TRUTH WILL COME OUT AND IT IS ACROSS THE WORLD! Now governments are calling out other governments for fraud. A lot of fingers are going to be pointed as people are scared for their lives. This is very SERIOUS and heading to Nuremberg Trials. People are coming out globally as whistle blowers trying to protect their ASSES! https://twitter.com/i/web/status/1393281170964500480 Criminal charges have been filed against Martin Ackermann, the head of the Swiss national covid-19 science task force, for deliberately and successfully frightening the population. Breaking: Criminal charges filed against Swiss Corona Task Force, including (1) Implausible ICU capacity prognoses (2) Manipulation of ICU data (3) False statements on hospitalizations and deaths (4) Shifting rationale for lockdown measures. https://www.theepochtimes.com/german-judge-declares-mask-mandates-illegal-and-harmful-to-children_3834457.html German Judge Declares Mask Mandates Illegal and Harmful to Children https://thebl.tv/us-news/former-who-scientist-warns-of-a-plan-to-depopulate-and-control-the-world-using-the-ccp-virus.html Former WHO scientist warns of a plan to depopulate and control the world using the CCP Virus | Whistleblowers coming out of the woodwork across the world as they see the arrests gaining momentum. https://greatgameindia.com/nepal-super-indian-variant/ Portugal Accuses British Government Of Lying About Nepal Mutation Creating Panic Of ‘Super Indian Variant’ – Now governments calling out governments for fraud – the covid house of lies is burning down!

THE GLOBAL FRAUD AND CRIMES ARE COMING OUT! THE LIES, DECEIT AND FRAUD ARE BEING EXPOSED AND PEOPLE ARE BEING ARRESTED ACROSS THE WORLD NOW! Fauci is a mass murderer, he is next. Robert F. Kennedy Jr. Unpacks Dr. Fauci’s 3,234 Emails | Fauci Lied. People Died. Robert F. Kennedy Jr. Unpacks Dr. Fauci’s 3,234 Emails | Fauci Lied. People Died. | The world discovered from the thousands of emails of Dr. Fauci released under the Freedom of Information Act in the USA the following: 1) COVID was created. 2) Hydroxychloroquine is a drug that will cure COVID. 3) Dr. Fauci knew Hydroxychloroquine worked to cure covid as his paper in 2005 disclosed. 4) Dr. Fauci purposely ran Hydroxychloroquine overdosing of people that resulted in many being murdered to prove falsely that Hydroxychloroquine does not work. It was the purposeful overdosing of this safe drug that caused the murder of those participating in this study. This was to falsely claim Hydroxychloroquine was unsafe. He knew it was safe since 2005 and doctors immediately disputed these criminal false studies as they were having the opposite effect with patients they were saving and doctors using Hydroxychloroquine had no death by overdose as Dr. Fauci studies created. 5) Dr. Fauci purposely suppressed cures such as Hydroxychloroquine and Ivermectin as these are safe and effective cures in order not to violate the Nuremberg Code of 1947 if these safe effective treatments were allowed to be used it would have forbidden the use of dangerous untested drug experiments, they falsely called vaccines as they do not meet the legal definition of vaccines as they neither protect the recipient from infection nor stop the transmission of infection as we well know they are not 95% effective as humanity was lied to but only 0.8% to 1.3% per The Lancet research science. 6) There is no such thing as asymptomatic spread. 7) Face masks do not work 8) No lockdowns were necessary and served no purpose other than to create harm to society and they did not reduce infections. 9) Facebook purposely promoted authoritarian propaganda regarding COVID 10) Dr. Fauci was in secret communications with Bill Gates the entire time. 11) We were not given actual numbers of those who died as a result of COVID on purpose instead the numbers were falsified that were reported to the public to induce fear. 12) Dr. Fauci knowingly lied to Congress May of 2021 under oath in his testimony, which is a crime. Read 3,234 Pages of Dr. Fauci’s Leaked Emails https://assets.documentcloud.org/documents/20793561/leopold-nih-foia-anthony-fauci-emails.pdf

This is for Wenny who drank the Vaccine Kood-Aid “ Lifesite News 7June2021 COVID hospitalizations, deaths for the vaccinated more than triple in one month, CDC reports A total of 10,262 SARS-CoV-2 vaccine 'breakthrough infections' – defined as coronavirus infections in fully vaccinated people – were reported to the CDC from 46 U.S. states and territories between January 1 and April 30, 2021.”. And to Captain I pose a question because I already know he’ll remark that out of millions vaccinated these represent only a small percent. So my question to Captain: what numbers do you have to get to in order that these deaths and hospitalizations are no longer acceptable? And remember, we’re only months into this experimental gene therapy they like to call a vaccine. And if these breakthrough cases are a result of ADE from contracting the “wild” virus, be forewarned Covid and its variants will be with us forever (just like the annual flu) so be prepared to drop dead sooner or later you vaxxed lot.

Remember the scarcity tricks they used? That is propaganda. Remember the politicians were getting access before the public? That too was propaganda to make people want it. The fact is KILL SHOT centers across the world sit empty and most are shutting down. NOBODY WANTS THIS POISON KILL SHOT. ONLY IDIOTS are taking this. Now we know it scientifically proven not effective too! PROOF YOU HAVE BEEN LIED TO AND DEFRAUDED BY GENOCIDIAL CRIMINALS! Remember being told by government and media you had 95% protection with the injection? Sorry if the truth hurts but here is science that proves you have been defrauded by criminals. | Lancet research confirms Injections offer NEAR ZERO PREVENTION or PROTECTION! Peer-reviewed research at The Lancet shows that experimental injections reduce your chance of catching COVID-19 by: Pfizer: 0.8%, Johnson & Johnson: 1.2%, Moderna 1.2%, AstraZeneca 1.3% https://www.thelancet.com/cms/10.1016/S2666-5247(21)00069-0/attachment/b557d9c2-6222- 4f2e-95f4-2f634e704aeb/mmc1.pdf | Supplemental Material PDF https://www.thelancet.com/journals/lanmic/article/PIIS2666-5247(21)00069-0/ | This science proves conclusively you have been lied to and deceived by a group of criminals. You have statistically near zero protection and worse expert doctors in vaccine development scientifically have proven that you have been ‘pathogenically primed’ for death. This is science that cannot be disputed. You would be best getting your affairs in order and working on your bucket list. Time is of the essence for you and all who have taken this KILL SHOT. Front page news, where is it? | This house of fraud is burning down and every SOB involved will be arrested, prosecuted and executed under Nuremberg Code of 1947 violations! BILLIONS ACROSS THE WORLD DEMAND JUSTICE AGAINST THESE BLOOD THIRSTY MURDERERS!

Well there you go. Stupid people buying the jab on the black market. Can't wait until next flu season when the real chit show begins