An act of rebellion needed to save Panama City 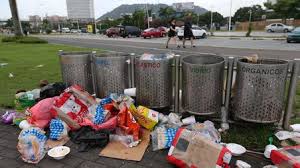 Panama City is not a friendly city, much less cordial. It is a naturally aggressive city as port cities usually are. This is not a city with grand boulevards or cool avenues, this is a city of concrete and steel.

This city has been punished by history, at least for the last century, which meant that it grew in a haphazard way with little concern for public goods and common spaces. Panama City resembles some of its worst inhabitants, therefore it is macho, racist, classist, and likes to pretend, pretending to be what it is not.

My memories of the city exceed half a century of experiences that go from the noble neighborhoods to the most popular communities. I have always been struck by the amount of garbage that has characterized

this city. Today it is worse than ever, with a collapsed state sanitation service and a sanitary landfill that was exceeded and threatens to become a health crisis.

The city's infrastructure reveals a terrible truth: we live in an underdeveloped country. The streets are bad, the sidewalks are broken (when they exist), the sewers have already lost the war against garbage and the rain, and the darkness, the crowding, and the faded colors of houses and buildings are daunting.

The city's economy is impoverished. A Maserati can be seen in front of a fruit stall. Street vendors sell everything and offer the same thing; they have invaded streets, sidewalks, parks, and the few public areas we have.

People asking for “milk for the baby” are accompanied by migrants looking to return somewhere.

The nights are owned by an army of homeless, homeless, without food and without health. The bill for addictions and poorly cared-for mental illness is plain to see. In addition, street prostitution has taken more and more streets and more and more hours in the city.

Citizen insecurity is a matter for the National Police and the social deterioration of children, young people and entire families is for Mides.

A blind eye
Everyone turns a blind eye to the problem of prostitution, beggars and homeless people. Nobody cares if they open a canteen next to a school, or close libraries to open more brothels.

We have a generation of urban youth who have not finished their education, who do not know a permanent job and who do not have a family.

With the neglect and carelessness of the political class, we do not know how many of us live in Panama City, where we live and what we live on.

Neither the national government nor the municipal government is interested in promoting the creation of solid and robust companies that create jobs. Entrepreneurship is a prostituted word that almost means one more subsidy or another favor that a politician does who "grants" you a kiosk, an aid from Ampyme, or a salve from the community board. Here it seems that the authorities know nothing about business incubators, promoting innovation, and fostering business ecosystems. It seems that we don't know how to add value to what we have and can do.

At your expense, at my expense, at our expense, and at the expense of future generations, more than 2 billion dollars in tax incentives for tourism were granted to a small group of businessmen.

Those who know agree that the cure will be worse than the disease. When some tourists finally arrived, the ramp they were supposed to get off the boat fell down. Those who avoided this destination had to face the voracity of the tourist transport that charges 50 dollars to take them from the Old Town to the Miraflores lock. Maybe visiting a restaurant where soda is $6, a microwaved meal sells for $25, and smiles weren't included in the bill.

We punish tourists with our bitterness, our rudeness, and our hostility.

Before you decide to flee the city to emigrate to Sarigua, go to meditate in Punta Burica, or clean a beach in Bocas del Toro, it is necessary to understand that Panama City is like this because of us We are the ones who throw garbage in the street, we are the rude ones with the tourists, we are the ones who walk where we want and drive in total anarchy. We are also the ones who choose and tolerate those who rule.

More Courtesy
If you read this far, please make an act of rebellion against this state of affairs. Today, tomorrow, and every day be more courteous and gentle with your family, your neighbors, and the other living things that cross your path. When driving, obey red lights, stop at the corner, let pedestrians pass, and give courtesy to firefighters and ambulances.

Take the trouble to support some ventures regularly. This is not buying a cookie from anyone on the street, but opening your wallet to the entrepreneurs and entrepreneurs who kept this country going during the pandemic.

Do something for the people who have less, even if you feel that you lack everything, you will find someone who lacks more. It is not about charity, but about empathy and solidarity.

Improve the tip to the guy who charges you the supermarket. Help the person in front of you at the pharmacy who can't buy all his medicines. Give your time to the elderly, children, youth, people with disabilities, and migrants passing through our country. You have very good clothes that you don't wear, you also have shoes that can be used by other people.

The best memories that a tourist keeps of a place are those that have to do with the generosity of the people. Don't let them take advantage of tourists or anyone else. We can all do much more to improve this city, but the first thing is to understand that the problem is ours, we are part of the cause and we have to be part of the solution.

If you have a beautiful moment in this city: a wonderful sunrise over Avenida Balboa, the sighting of a melodious hummingbird in Parque Omar, a squirrel visiting a tree on Via Argentina, the romance of a pair of herons in Panama Viejo, the romp of dogs in Costa del Este, children jumping in Don Bosco, a grandson walking his grandfather in Betania, a neighbor helping to push a car in Pueblo Nuevo, a neighbor sharing her meal in Parque Lefevre, a tourist looking at handicrafts in Santa Ana, a scraping vendor preparing his magic in the cathedral, a pilgrim touring Calidonia, a family of ñeques moving on Cerro Ancón or a sloth hanging from a branch in the reverted areas, you have much to share and give to this city.

We have made this city what it is and we can save it. It all starts with an act of rebellion.