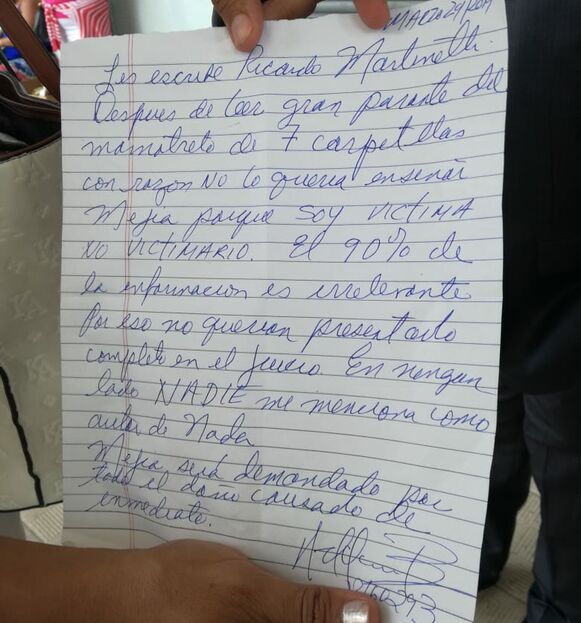 Note after speed reading over 3,000 pages of evidence

Former President  Ricardo Martinelli has described himself as ”a victim not a victimizer” and has threatened to add a Supreme Court Judge to the list of people he is currently suing.

He made the statements in a handwritten note to journalists after his first view of the 3000 pages in seven folders issued his first opinions on the content of the seven folders containing 3,000 pages of confidential information about the victims spied  on.by the National Security Council during the last two years of his mandate.

For the second consecutive day, the former president went to the prosecutor's office, where the files are held.

The Trial Court ordered that the defense and the complainants have access to them, for a period of seven calendar days, and a recess was ordered in the oral trial of  Martinelli for the alleged commission of four crimes: the inviolability of secrecy and the right to privacy, and two types of embezzlement.

"90% of the information is irrelevant, that's why they did not want to present it completely at the trial, and nowhere does anyone mention me as the author of anything," Martinelli adds, and points out that he will  immediately  sue Mejía "for all the damage caused ”

Judge Roberto Tejeira, president of the Court of Judgment, had warned the parties that they could not disclose or filter information contained in the files. At the time, Mejía - as judge of guarantees authorized access only to Carlos Carrillo, coordinator of the team of defense lawyers  …Story developing