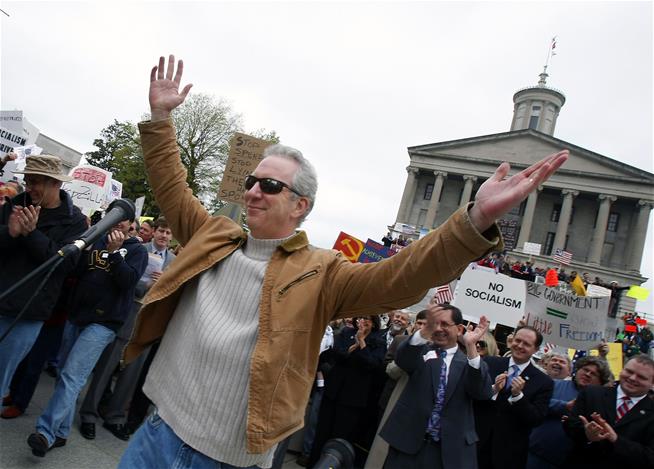 Valentine at a Tea Party rally

Now that Phil Valentine, the conservative radio talk show host, has been hospitalized with COVID-19 and placed on a ventilator, some of his listeners are deciding to get vaccinated after all. One of them is his brother. "As soon as I found out this thing had hit him like it hit him, I went directly to the Wal-Mart," Mark Valentine said. "I said, you know, 'Y'all pick the arm.'" The family announced that Phil Valentine, who has been in the hospital for more than two weeks, was placed on a ventilator Wednesday to help him rest, WPLN reports. Valentine previously had been on oxygen during the day and a ventilator at night. His family reported a slight improvement in his condition over last weekend.

Phil Valentine had not been supportive of coronavirus vaccines or mask mandates before he contracted the disease. He has not been vaccinated. But when he returns to the air, his brother said, he'll be the "most pro-vaccine person you've ever seen," reports WKRN. Fans have posted on his Nashville station's Facebook page that they've now decided to get the shots, which is what Mark Valentine did despite his own skepticism about the vaccines. When he went in for a dose, he reported, "The guy says, 'Do you have any questions or concerns?' I say, 'Yeah, I got a bunch of them but do it anyway.'"

Here's what he should have had for the previous 2 weeks,Ivermectin or HCQ ,azithromycin & VIT D & ZINC. But was deliberately prevented../..So their narrative doesn't win ..at best,it a one off case sorry..

Good move on their part, pick people who have a base of people and then make sure you hit em with a strong amount of the virus.. the rest will run scared

You remember all the covidSCUMbags...you all know them the ones who spread disinformation about the KILL SHOT resulting in blood on their hands. How many times did these evil scum present factcheckers as their proof of the propaganda lies they spread? Remember that? BOMBSHELL! Facebook's independent fact checker is not independent, and the US Congressman has questioned the impartiality of factcheck.org, which is supposed to tackle vaccine disinformation, as it is directly funded by vaccine manufacturer Johnson & Johnson." "Who pays factcheckers' paychecks? The vaccine fact checkers at factcheck.org, who claim to be independent, are funded by an organisation that holds shares in a vaccine manufacturer worth over $1.8 billion and is headed by a former director of the CDC." "Factcheck.org responded to the allegations by disclosing its funding sources, the Robert Wood Johnson Foundation, one of the benefactors that holds nearly $2 billion worth of Johnson & Johnson stock. The CEO of this foundation is Richard Besser. Facebook is in big trouble. It has just been discovered that Facebook Covid vaccine fact checkers are funded by vaccine companies THIS IS GENOCIDE BASED ON LIES, DECEIT AND FRAUD. Everything is 100% based upon fraud from fake PCR fraud tests, fake fraud new cases, fake numbers of real deaths BUT real murders through other methods to get people terrorized to take the KILL SHOTS...fake efficacy of KILL SHOTS stated at first 95% now we know it is near zero per The Lancet, they lied told people they would be safe if they took the KILL SHOT now these same people lay dying or dead now...or quickly heading towards their death as their immune and body's have been destroyed by these KILL SHOTS...all the evidence for the failures and lies is coming out now globally as countries with the highest KILL SHOT rates are seeing complete failure and death!

*** BREAKING NEwS DOCTOR EXPLAINS THE KILL SHOT HAS BEEN TESTED TO KILL HUMANS *** DR ALIM EXPLAINS MESSENGER RNA IN THE VACCINE IS A BIO WEAPON https://www.bitchute.com/video/wyOueLwucFHd/

MEXICO'S PRESIDENT WARNS: "WE MUST NOT SUBMIT TO THE DICTATES OF BIG PHARMA" https://www.bitchute.com/video/tAsrdxPgrmGr/

*** BREAKING GENOCIDE NEWS *** Dr. Fauchi/CDC/FDA linked to the murder of Americans through drug removed from Ebola study to purposely KILL AMERICANS and push people into terror to accept the KILL SHOT! New heinous crimes uncovered and lawsuits filed now. Hear the legal testimony provided. DEPOPULATION BY ANY MEANS: DR. BRYAN ARDIS, DR. REINER FUELLMICH AND DR. WOLFGANG WODARG https://www.bitchute.com/video/jv3GSOcoIGCP/ | Prepare to frightened to your core just what mass murderer psychopaths' genocidal evil bastards are behind the endless death. They have been murdering people on purpose! ALL IS BEING DISCLOSED NOW OF TRUTH LIKE A FIRE HOSE TURNED ON GLOBALLY!

Wow! This is one hokey story!

So Captain, give me proof via reputable studies that they ate “lies” or “misinformation”. You are good at dismissing alternate news that doesn’t agree with you but you rarely if ever give verifiable debate.

So Hogan when you and Brian post something it’s ‘don't shoot the messenger “ but if others call you out for the lies and misinformation it’s call MSM propaganda!

For those who haven’t followed earlier misinformation posts by the Russian troll and GRU useful idiot BRIAN aka Alexandre Avakian , Miami and Florida was always his pet “ success story “ and the example to follow during the pandemic.. basically let it all run and to hell with the science. This STATE now has the WORSE RECORD of Covid outbreaks of any in the USA. Brian apologies at not being able to attend here today as he is off to the embassy to get his Sputnik booster jab.

Bgodiver, somehow I trust your analysis more than the story. This could very well be another pro-vax attempt to push an agenda and become a Social Media hit just like “I just left the ER”. (If you’re not familiar with this propaganda piece, it’s a bunch of tweets and retweets from people purporting to be doctors just leaving the ER at the same time with the same observations: “ 'I Just Left the ER...We Are Officially Back To Getting Crushed By COVID' “ (Delta Variant) - Insane Fearmongering - More Deep State BS.). Be on the lookout, people, for this “story” of Phil Valentine to make the social media rounds for the Left. If it turns out to be legitimate, he had choices (to take care of himself or let the government do it for him with their “vaccine”. His body, his choice.

Saturday, the state of Florida reported more new COVID-19 cases to the Centers for Disease Control than any previous day in the coronavirus pandemic: 21,683. That’s a 12.1% jump over the previous record, Jan. 7’s 19,334 cases during the worst month of the pandemic. Daily case counts routinely surpassed 10,000 as the pandemic peaked a second time. In the succeeding months, daily case counts returned to 2,000 and 8,000. The last half of July looks like the start of Florida’s third COVID-19 peak, as the case numbers reported Thursday (17,589), Friday (17,093) and Saturday mix in with Jan. 6-8 to comprise the top six individual case count days. The average over the last seven days is 15,817 cases. Read more here: https://www.miamiherald.com/news/coronavirus/article253168148.html#storylink=cpy

It’s always thus ….Brian. Hogan and Ay ya will not convert until they start the intubation..By then it’s too late . Hogan as I have said many times it’s not % but quantum that matters. As vaccines don’t stop 100% of hospitalisations then it figures that if all 100% of U.K. were to be infected you would get SOME people in hospital who had been fully vaccinated. If you can’t figure out the maths here then it’s time to get back to maths class and to learn some basis biology whilst there

Now here’s some facts that left-wing news outlets (also known as MSM) will never report: ‘Mathematically Impossible’ for Vaccines to Eliminate COVID —— The latest data suggest the wave of COVID among unvaccinated has peaked and natural herd immunity has set in, while vaccinated individuals are actually becoming more prone to infection. || read these indisputable points to understand why this is — and don’t bother shooting the messenger—it doesn’t change the facts: “In the U.K., symptomatic COVID-19 cases among “vaccinated” individuals have risen 40% in one week, reaching an average rate of 15,537 new infections a day being detected. Meanwhile, symptomatic COVID-19 cases among the unvaccinated has declined by 22% and is now at a current daily average of 17,588. #”This suggests the wave among unvaccinated has peaked and that natural herd immunity has set in, while “vaccinated” individuals are actually becoming more prone to infection. #”Data show countries with the highest COVID injection rates are also experiencing the greatest upsurges in cases, while countries with the lowest injection rates have the lowest caseloads. #”100 fully injected crew members had tested positive onboard the British Defense aircraft carrier HMS Queen Elizabeth. The Navy ship has a case rate of 1 in 16 — the highest case rate recorded. This suggests vaccine-induced herd immunity is impossible, as these injections apparently cannot prevent COVID-19 even if 100% of a given population gets them. #”It is mathematically impossible for COVID shots to eliminate SARS-CoV-2 infection. The four available COVID shots in the U.S. provide an absolute risk reduction between just 0.7% and 1.3%. Meanwhile, the noninstitutionalized infection fatality ratio across age groups is a mere 0.26%. Since the absolute risk that needs to be overcome is lower than the absolute risk reduction these injections can provide, mass vaccination simply cannot have a favorable impact.“ - the Defender. *** Now, I know many of the commentators on this site have a problem understanding anything that doesn’t come from CNN, NYTimes,MSNBC, or other MSM but try, for once, to absorb facts not fantasy. Covid is here to stay; vaccinations compound the problem and people need to be pro-active with their own healthcare choices.

Interesting. I've been involved in conservative politics for 40+ years and I've never heard of this guy. So for the headline to declare that Vax skeptics are now getting shots because he's in the hospital isn't credible.

Hey Gordo, can you provide any empirical information substantiating your claim or are you simply parroting? By dumb and dumber which one of you are identifying?

More clotshot propaganda. LOL The vax is going to ruin your vascular and natural immune system. If you survive the side effects consider how many years it will shorten your life. You are injecting a spike protein factory. Dumb and dumber.

Well his choice. Many questions but to be honest I do not really care. We have no idea what his health was before, why he waited to do something, was he taking zinc. Vit D etc.