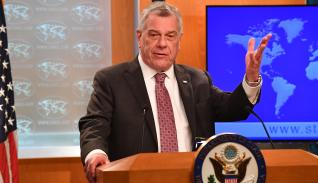 Using the Central American Parliament (Parlacen)  to avoid extradition to the United States "would damage the rule of law and promote impunity in the region," said the US  Acting Assistant Secretary of State for Western Hemisphere Affairs Michael Kozak  on Tuesday, July 28.

"Individuals within Parlacen would like to use membership as a shield to block the extradition to the United States of accused criminals," Kozak wrote on his Twitter. The message was retweeted by the US embassy in Panama.

Kozak did  not mention the Martinelli Linares brothers,  who are currently behind bars in Guatemala, awaiting extradition to the United States, on charges of alleged conspiracy to launder money linked to Odebrecht.

They have asked to be sworn- in as alternate deputies of Parlacen, and have claimed that their detention violates the "immunity" of the members of that body. The Panamanian bench in the parliament has already rejected the move.

According to a criminal complaint filed by the FBI in federal court in New York, the two sons of former President Ricardo Martinelli participated as " intermediaries " in receiving and paying bribes for $28 million, "under the leadership of Odebrecht."

The payments would have benefited a Panamanian official, whose name has not been noted in the documents released so far (are sealed by order of federal judge Robert Levy). However, the official is described as "an officer with a very high position in the government of Panama" between 2009 and 2014, a period that corresponds to the presidential mandate of  Ricardo Martinelli and, in addition, a  "close family member" of the two accused. Guatemalan media have been less circumspect and identify their father  as the family member. The ex-president is facing ,multiple corruption investigations including Odebrecht.