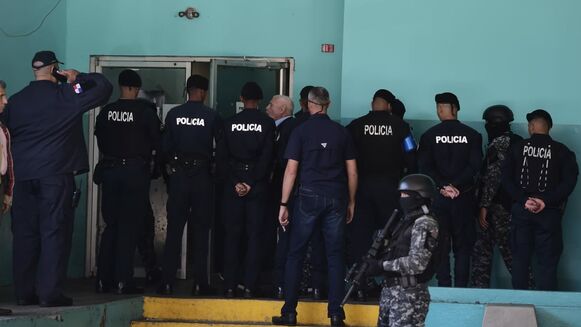 Former president  Ricardo Martinelli was not on time on Friday, March 22 for the resumption of his trial for illegal interception of communications.

Once again, the man who wants to run for mayor played a health card and after leaving El Renacer prison under heavy escort he was visited at the court by a team of doctors. and according to media reports he had a blood pressure reading of 160/90.

The hearing was adjourned tt3 pm and he was taken to Santo Tomas, [public] Hospital, for further evaluation. The prosecutor asked the court to contiue with the trial while Martinelli was absent, and his lawyers preent.

He has in the past refused to take prescribed medications, and last week when a team of psychiatrists declared him able to stand trial they warned that he should continue  to take his designated drugs

The reprogramming of his trial for Friday took place after the clarification of the Institute of Legal Medicine and Forensic Sciences (Imelcf) that determined that Martinelli, currently under preventive detention was able to attend this proceeding.

This process began on March 12 but was suspended because the defense of the former president requested that it be examined by the Imelcf doctors. That request was accepted by the judge, and in addition, it ruled that the private psychiatric examinations that had already taken place be reviewed.

Meanwhile, Balbina Herrera, victim and coadjutant complainant, said that this trial is a "precedent", not only in the case of former President Martinelli but for the current and future governors of the country. This, in the sense that you cannot use the National Security Council to persecute opponents or adversaries., "As of today there is a before and after," she said he added.

Carlos Carrillo,  of Martinelli's legal team, said they have always shown their willingness to face this process, but also respect the integrity and presumption of innocence of their client. Other lawyers present are Sidney Sitton, Jessica Canto, and Alfredo Vallarino.

Marta Linares de Martinelli, who did not give statements to the media, also attended.

The lawyer Alma Cortés, a minister in the government of Martinelli, and herself under criminal investigation, was also present in Plaza Ágora. Cortés arrived in a Lexus vehicle, which carried flags of the Democratic Change (CD)party.

Currently, Martinelli is running as a candidate for deputy of the 8-8 circuit and for mayor of the capital, for the Democratic Change and Alliance parties.

The Oral Trial Court is made up of Roberto Tejeira (president); Arlene Caballero (rapporteur) and Raúl Vergara.

Martinelli is accused of the alleged crimes of inviolability of secrecy and the right to privacy and against public administration.

If the news media never reported any of this stuff he would just go away. As long as they give him center stage he will take it. If the audience just ignores him he will go away quietly.

He is as bad as Trump.. All either of them wants is attention - to be in the news for good or bad.