The railroading of an Attorney General 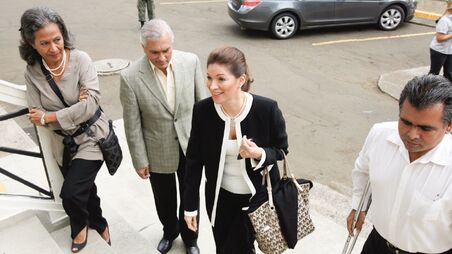 Ana Matilde Gómez, arrives at the Supreme Court of Justice in August 2010.

On August 12, 2010, the  Supreme Court of Justice issued one of its most controversial decisions: the dismissal and conviction for the crime of abuse of authority of then-Attorney General, Ana Matilde Gómez

Now, the Panamanian State faces the consequences of the rigged judicial process against the ex-AG, since the  Inter-American Commission on Human Rights admitted, after years of study, the request of Gomez and human rights organizations, which has caused a thorough examination of the case and the institutionality of Panamanian justice writes Rodrigo Noriega in La Prensa

Gomez's conviction came from a criminal complaint that had been filed by a former prosecutor investigated for alleged corruption. At the juncture of a change of government, the permanence of the attorney Gómez was attacked by lawyers and politicians, and taking advantage of the appointment of two new magistrates of the Supreme Court of Justice executed their plan fully.

The lessons that can be learned from that moment should serve to place the rule of law in its right dimension in the face of the challenges of a globalized economy, the need to attract quality foreign investments.

The Panamanian State will have to face the consequences of the judicial ruling.

Almost nine years after being tried and sentenced to  six months in prison and four years of disqualification for the exercise of public functions, the Inter-American Commission on Human Rights (IACHR), admitted the petition filed by the former Attorney General, the Center for Human Rights and International Humanitarian Law American University – Washington College of Law, the Panamanian Association of Constitutional Law and the Association Center for Panamanian Studies and Social Action.

According to the report of the IACHR, dated October 16, 2018, , the claim filed by the petitioners mentioned above on February 16, 2011, in the judicial process that resulted in the separation and conviction of the ex-prosecutor , the rights to personal integrity, judicial guarantees, the principles of legality and retroactivity and judicial protection of the American Convention on Human Rights were violated.

The facts relevant to the petition are based on the complaint filed on July 15, 2009, by former prosecutor Arquimedes Sáez, who requested that the then Attorney General of the Nation be investigated for the crime of abuse of authority by authorizing illegal telephone interceptions against him. , and that this is why on September 29 of that year the substitute administration opened the investigations against the then AG Gómez. As a defendant, filed multiple incidents regarding the investigation that were never resolved by the Supreme Court

On January 28, 2010, by 5 votes in favor and 4 against, the Court adopted the precautionary measure of separating the attorney general.

Gomez was sentenced on August 12, 2010 to the definitive loss of the position of the attorney general, to 6 months in prison, commutable by $4.000dollars of fine, and to 4 years of disqualification of functions as a public servant. All the appeals filed by her during the process were denied or ignored by the Court.

The petition was notified to the Panamanian State on August 16, 2016, obtaining a first response from the State on November 16, 2016, with additional observations from both the petitioner and the State in 2017.

The response of the Panamanian Government has been persistent in that the petitioner had the right to appeal for review of the judgment of August 12, 2010, so she had not exhausted all the resources provided by the country's domestic jurisdiction.

The IACHR has said that the appeal for review “... is not, set up in an appropriate remedy that ensures the revision or double conformity of a conviction before being final. Consequently, the State did not make available to the alleged victim a remedy that allows to protect the rights that are allegedly violated ... ”.

In this phase the victim and the State have time to find a negotiated solution. After that term, the IACHR will take the case to the Inter-American Court of Human Rights to obtain a mandatory sentence against the Panamanian State.

These sentences can include the payment of lost wages, moral damages, interests, and legal costs, which together with a public apology could be the conclusion of a case that should never have happened and that should serve as a warning.

The politicians and lawyers who made the plot that would lead to the separation of Gomez from office, and the conviction, it seems will avoid all responsibility, since who is obliged to pay and compensate the damages caused is the Panamanian State.

However, a conviction of the Inter-American Court of Human Rights would not be the only sanction. Panama is on the gray list of the International Financial Action Task Force (FATF), which considered that the country lacked effectiveness in the fight against money laundering and related crimes. Shaking legal institutions, just when they are in the process of concluding many high-profile investigations, could have serious consequences for the banking and financial sector. The message for international investors would be disastrous, as it would confirm the perception that Panama does not offer legal certainty.

According to the Constitution, the term of service of an attorney general is 10 years. However, the experience of the last 29 years exposes a high instability of the office . With eight attorneys general in 29 years of continuous democracy, it becomes clear that in terms of the rule of law we have a long way to go.

With the changes of government, the new administration tries to obtain officials that are related to it, and, to corner those who exercise the position so that they leave it.

Justice is, then, a part of the political spoils.