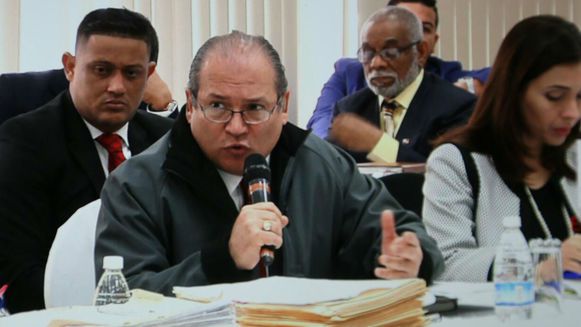 Supreme Court Judge  Harry Díaz who acted as prosecutor in the intermediate phase of the wiretapping trial of former president Ricardo Martinelli said  on Wednesday, August 15  that he had been subjected to an extortion attempt by the Martinell lawyers.

In an interview with Telemetro, Díaz said that on one occasion the lawyer Sidney Sittón - part of the defense team sent him a text message, in which he recommended leaving the country if Democratic Change won the elections.

Díaz said that Sitton also invited him to parties in which women participated while the Martinelli case was ongoing.

He also said that once Sitton tried to present a Venezuelan citizen named Velkis Montaño, and even had her take a gift book to his office at the Gil Ponce Courthouse, Supreme Court] which, however, he had to  be delivered to his staff , because he was at a medical appointment, but she then called him at the office several times, to alert him that this group - lawyers of Martinelli - was trying to set  a trap.

Díaz demanded that the woman make a written statement, in which she relates that they intended to threaten him and that Sitton paid her $3,000 to contact him and record the day he took the book.

He saidn that at that time he did not make the facts public because he did not want to affect Sitton's family; However, now, by making a public statement, the Public Ministry can initiate an ex officio investigation.

Díaz, in addition, described as false an alleged complaint of sexual harassment filed against him by lawyer Roniel Ortiz - also of the Martinelli defense team -, and said that such legal action was for alleged labor harassment of an official who, as he warned, he had to move from his office to another office, since he did not have room.

Meanwhile, Díaz said there was negligence or corruption the decision of judges Roberto Tejeira, Arlene Caballero and Raúl Vergara, who on August 9 declared Martinelli not guilty of crimes against the inviolability of secrecy and peculation.

Díaz, who acted as a prosecutor until the intermediate phase of the process followed by Martinelli, said that the judges did not enter to assess the merits of the admitted evidence.

He stressed that in the ruling in which the Supreme Court declined the jurisdiction of the Martinelli case to the ordinary sphere, the validity of the evidence incorporated into the process was established, but these were not duly assessed by the judges in their ruling.

Disciplinary case
According to Díaz, the three judges who acted in the Martinelli trial may be subject to disciplinary proceedings, since they ignored decisions of the Supreme Court of Justice related to the case.

He stressed that he is surprised that the judges have mentioned in the decision of violations of due process, despite the fact that the Court had already validated all the evidence and actions of the judge of guarantees - Jerome Mejia - and the prosecutor.

Diaz said that the Court resolved a large number of appeals filed by Martinelli's defense for alleged violations of the process, and all those actions were rejected.

Again, right out in the open, for the entire world to see, Panama's judges have no reservations about making judgement, without the benefit of assessing the merits of the admitted evidence. There is no apparent use for prosecution or defense, since judges base their decisions on other factors, like what's most advantageous for them. There is no justice system in Panama. There is a smoke and mirrors show that only attempts to create the appearance of a justice system. We all can see it, but to call it by name is to admit we are all allowing it to exist, while fearing being subjected to it. Shame on all of us!