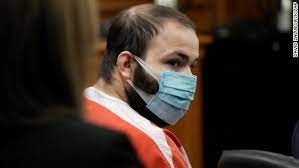 AFP – Denver, Colorado,  -The man who was accused of killing 10 people in a shooting at a US supermarket is ineligible for trial, US media reported Friday.

Ahmad Alissa, 22, is accused of indiscriminately attacking his victims in a Colorado store last March.

A native of Syria, Alissa faces more than 100 criminal charges, including 10 first-degree murders, related to the shooting, for which neither he nor prosecutors have suggested a motive.

Ingrid Bakke, a judge for Boulder County, where the incident occurred, ruled on Friday that Alissa must undergo mental health treatment before his case can proceed, the Denver Post reported.

The newspaper said they did not provide details in court about the nature of his health needs, but his lawyer said it was a "serious mental illness."

Alissa's brother, Ali, has previously said that his brother was "paranoid" and "antisocial."

Alissa was briefly hospitalized after being shot in the leg by police, who responded to the attack. An officer, among the first to arrive on the scene, was one of the deceased.

Colorado’s grim record
Colorado has been the scene of the two worst shootings in contemporary American history.

In 1999, two boys shot and killed 12 classmates and a teacher at Columbine High School. The young men later committed suicide.

In 2012, a heavily armed man broke into a movie theater in the city of Aurora, killing 12 people. The shooter is serving a life sentence without the possibility of parole.

According to a count by the Gun Violence Archive, a nonpartisan research group, of the 19,000 gun deaths recorded so far this year, more than 650 have been in mass shootings.

This week a 15-year-old teenager was charged with using his father's gun to murder classmates near Detroit, Michigan.

But despite public support for increasing restrictions, the calls generally lose steam, crushed by powerful voices lobbying in favor of guns and right-wing politicians who say that such measures violate constitutional rights.