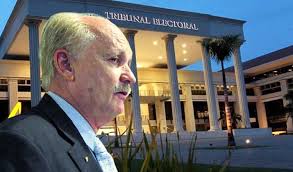 Former  Electoral Tribunal (TE)  magistrate Erasmo Pinilla who appeared as a witness in the wiretapping trial of ex-president Ricardo Martinelli on Tuesday, June 25 said that at one time when Martinelli invited the three TE judges to the presidential palace he asked why Pinilla was communicating with PRD leader r Mitchell Doens. The question came just a few days after he had received an email from Doens.

On  Monday, the analyst of the Section against Public Order of the CSN and a TVN journalist were presented as prosecution witnesses.   The journalist said that when he realized he was being intercepted he was stressed feared for himself and his family and had to adopt security measures.